Previously, on MinerBumping... A new threat appeared in highsec: anaCheeya ANARKY, the self-described "kingpin" of crime. But when anaCheeya's Orca was ganked by a large fleet of Catalysts, the kingpin decided he had no choice but to go straight. Mining permit in hand, anaCheeya prepared to set out on a new adventure.

anaCheeya's Orca had contained everything the miner owned. For some reason, he insisted on carrying everything around with him wherever he went.

As we saw previously, anaCheeya compiled some chat logs and sent a message to the Saviour of Highsec, apparently hoping for reimbursement. So far, the answer was silence. 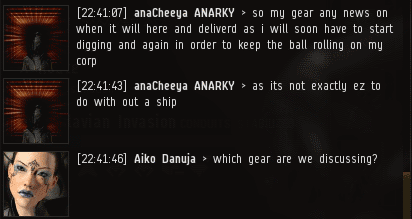 anaCheeya was eager to get his stuff back. Naturally, he went to the New Order for help. 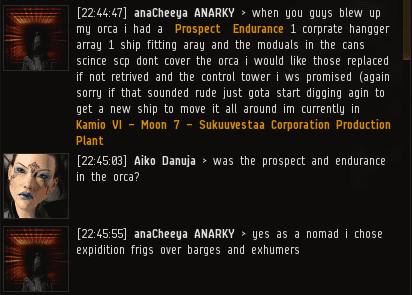 Since the creation of his null sec nomads corporation earlier that day, anaCheeya embraced his new identity--minus the "nullsec" part.

It is time to find out more about these "nomads". For that, we must refer to the corp's description. anaCheeya described himself as the leader of the gang, which, for the moment, consisted exclusively of himself.

But the corp description went on:

Unlike the typical "do everything/nothing" corps that one finds in highsec, anaCheeya had a grand vision for his corp. And it was bold. To begin with, rather than going to the trouble of conquering and defending space, anaCheeya's corp would enjoy the use of everyone else's space.

According to anaCheeya, his corp posed no threat to anyone. He and his group would merely trespass at will and take resources from everyone else.

anaCheeya's nomads would be totally defenseless, juicy targets. However, he discouraged anyone from shooting them. More could be gained through trade.

The economics of anaCheeya's system weren't totally clear, but the nomads would accept fuel for the towers they planned set up on other people's territory. 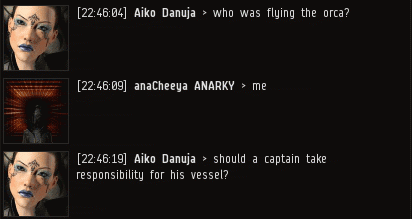 For now, anaCheeya's dreams were just that--dreams. Agent Aiko Danuja wanted to help the ambitious miner. The first step was to put aside his hopes for reimbursement. The second step: proving his worth as a trader. 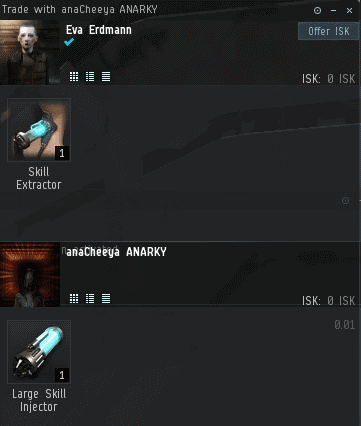 Aiko's friend Eva Erdmann participated in a series of trades with anaCheeya. The trading session went poorly, with anaCheeya suffering a net loss. But he gained something, too: Aiko and her friends provided anaCheeya with a seemingly foolproof plan to gain access to nullsec. 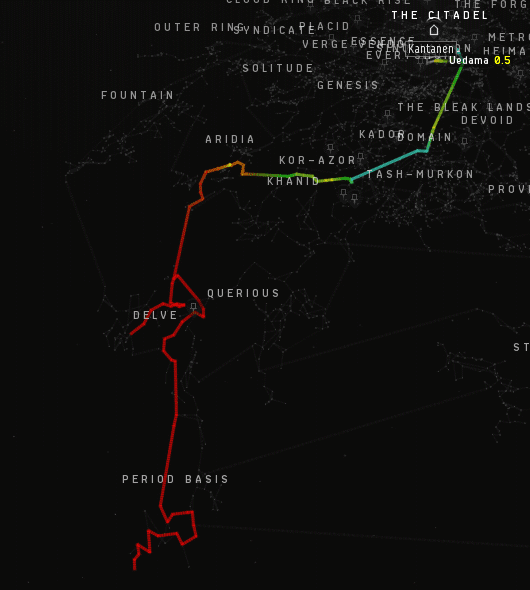 The journey would be a dangerous one.