Previously, on MinerBumping... With the help of his new friends in the New Order, anaCheeya ANARKY set out on a nullsec adventure. anaCheeya was required to entrust his property and control of his corporation, null sec nomads, with the Agents. But after arriving deep in Goon space, the miner found no one to greet him.

Once upon a time, anaCheeya mined in Rorquals and Orcas. Now he was forced to reboot his career from scratch.

The business model of null sec nomads corp remained mysterious, as it depended on nullsec empires allowing the miner to travel freely among them. But anaCheeya had multiple contingencies in place: If necessary, he could destroy even the mighty Imperium. 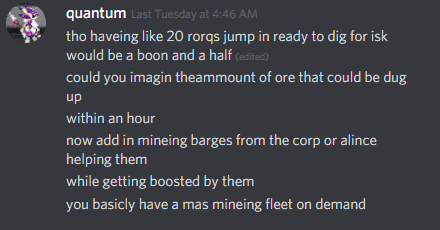 anaCheeya began to fantasize about his plans. This is not unusual. Miners tend to spend a lot more time fantasizing than actually doing stuff. 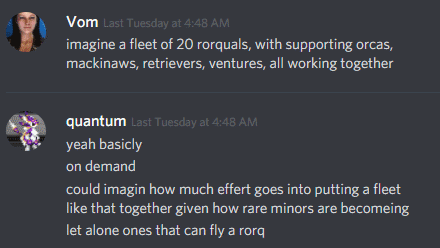 One might say that miners' daydreams are a form of being mentally AFK. 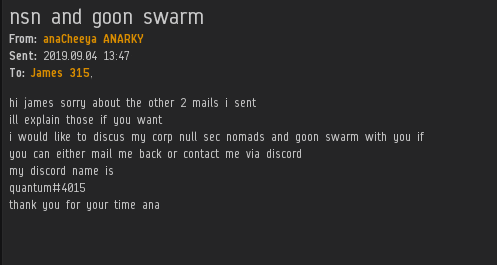 A few days after the adventure began, anaCheeya finally realized that his EVEmails to the Saviour of Highsec may have lacked context. All would be cleared up in time.

Later that week, anaCheeya was still having trouble getting his plan greenlit by Imperium leadership. He grew desperate:

For some reason, anaCheeya believed that biomassing his character was the key to getting through Goon security. According to Agent Aiko Danuja, the miner came up with this idea on his own.

After biomassing anaCheeya, the miner was reborn as aiva naali. At long last, anaCheeya/aiva decided to explain what the null sec nomads were all about. The miner wrote an essay--or manifesto--explaining all. Unfortunately, anaCheeya's new incarnation was no more fond of capital letters, punctuation, paragraphs, and the like.

The crux of anaCheeya's plan was twofold: First, the miner agreed not to take sovereignty from any of the nullsec empires he invaded; he would merely take their resources. Second, the miner would leverage the power of a superweapon called the "rat bomb". Agent Aiko was the inventor of said superweapon.

Recognizing that some nullsec powers may not agree to his idea, anaCheeya had a way to sweeten the deal: He'd recruit newbies to his corp and train them to take even more resources. 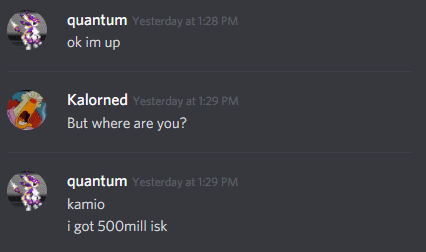 A few days later, anaCheeya's plan still had not come to pass. The miner had returned to highsec. His new priority was to regain control of the null sec nomads corporation. Agent Kalorned's associate was still the CEO. Kalorned was pleased to learn that anaCheeya had recently acquired a 500 million isk windfall, because... 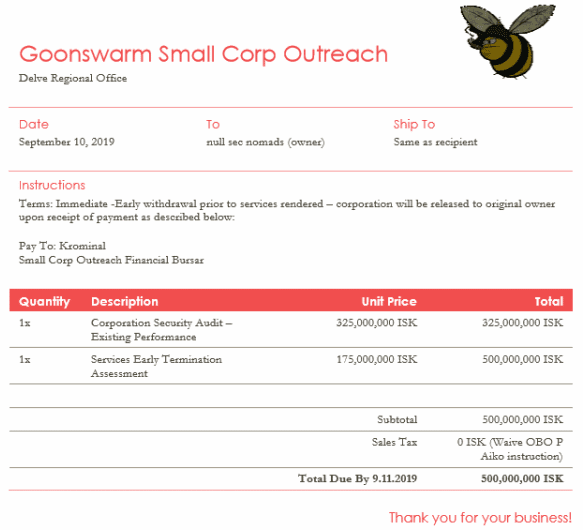 anaCheeya would need to pay 500 million isk for Kalorned to return control of null sec nomads. Though the miner had been willing to meet all of his demands up to this point, anaCheeya's faith was being sorely tested. The all-important question remained:

Did he have full faith?