Previously, on MinerBumping... anaCheeya ANARKY swore revenge after losing an Orca to a wormhole PvP'er. Alas, anaCheeya only succeeded in losing a Rorqual in lowsec and moving to highsec. Once there, anaCheeya lost yet another Orca, this time to friends of Agent Kalorned.

Kalorned was curious about the lonely miner. anaCheeya obliged Kalorned's curiosity by unveiling all of his plans.

Earlier that day, anaCheeya had indeed created a corporation called null sec nomads. Which explained precisely nothing about his decision to lose an Orca in highsec.

The miner confessed to Agent Kalorned that he was planning to engage in AFK carebearing. Everything that would happen to anaCheeya from this point forward ultimately stemmed from that motivation.

These were indeed damning chat logs. And how did the Saviour of Highsec come to acquire them, you ask? 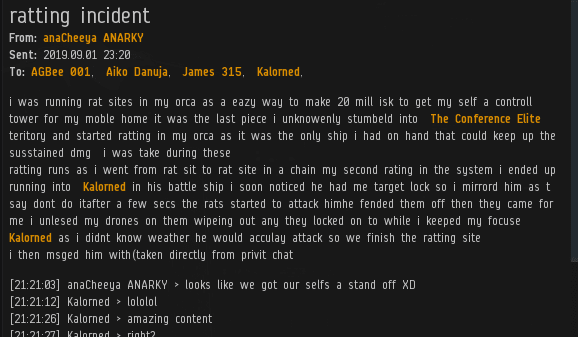 ...An unsolicited EVEmail from the miner himself. But anaCheeya was not willing to be fully transparent. He only provided me with the logs of his convo with Kalorned.

In the meantime, the miner had also been speaking with some of our other Agents. With them, he was not so courteous.

Unfortunately for anaCheeya, the transcripts were full of evidence of his bot-aspirancy.

Side note: You may recall William Rageclaw from the William's Rage series. Since the events of that series, William joined up with the New Order and dedicated himself to helping with the rehabilitation of wayward miners like anaCheeya. 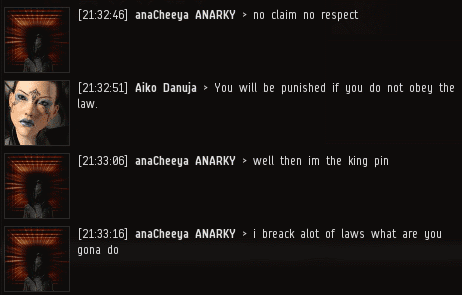 Confident that he was untouchable, anaCheeya fired off one smoking gun after another. He was highsec's new kingpin of crime. 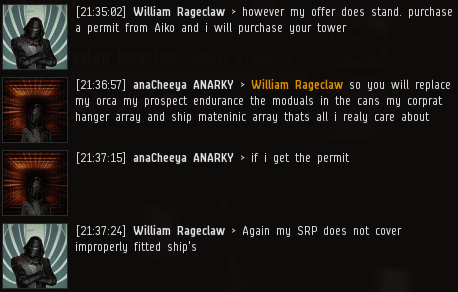 Despite anaCheeya's newfound supervillain status, Agent William hoped to sell the miner a permit. anaCheeya had a lot of demands, but there were limits to what even William could do for him. 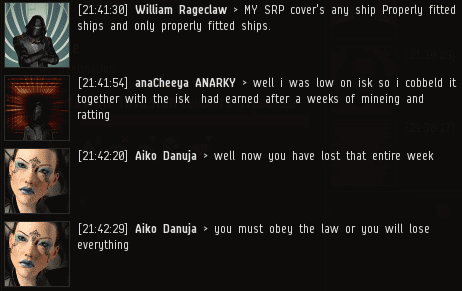 Agent Aiko Danuja didn't mince words--there was no time for that. This miner needed to get compliant with the Code right away, or else his EVE career would surely meet an untimely end.

anaCheeya had to admit that his criminal intellect wouldn't be enough to save him from further ganks. Maybe buying a permit really was the only way out of this mess. 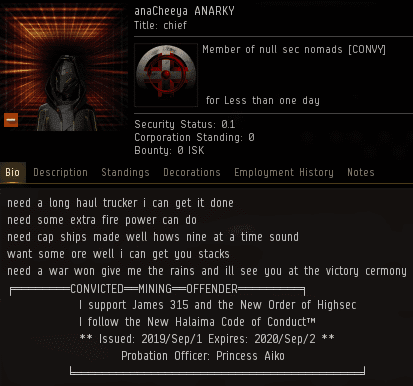 And so anaCheeya purchased a mining permit. But could the kingpin truly be convinced to comply with the Code?