Anti-Gankers and other carebear apologists think it's perfectly fine for a highsec miner to scream racial slurs in local chat. "It's understandable," they say. "The gankers drive them to it."

Actually, our Agents don't need to "drive them" to do anything. In fact, for some miners, dropping N-bombs is pretty much their first impulse.

After Agent Aaaarrgg ganked Jalrek's ship, the miner warped his pod around the system and made a ruckus in local. Since there was the possibility that Jalrek's pod contained implants, our Agent chose to pursue him.

One of the reasons that the anti-Code carebears have never been able to organize a successful resistance movement: They don't make friends easily. Trilyssia Mordecah was passing through the system when Jalrek made her laugh with his nonsense; the angry miner couldn't let her have the last word.

Aaaarrgg resumed his pursuit of the unlicensed Capsule in the Niarja system. The change of scenery hadn't improved Jalrek's attitude.

Despite Jalrek's persistent Code violations, Aaaarrgg was still willing to sell him a permit for only 10 million isk--a bargain at thrice the price.

To be fair, I doubt many people expect good things from Jalrek.

Realizing that there was no escaping our Agent that day, Jalrek docked up and prepared to log off. But before doing so, he sent our Agent an EVEmail:

The Anti-Gankers and carebear apologists would, of course, consider this an entirely reasonable thing to do. Jalrek had been driven to it. He was a weak, vulnerable newbie. What else was he supposed to do after losing his prized ship? 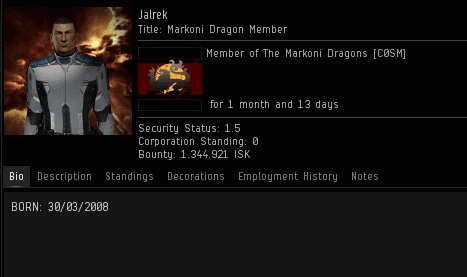 Then again, as his bio states (for some reason), Jalrek's character was created over a decade ago. A decade in EVE and still a Goofus! But surely the value of Jalrek's loss justified this grief-stricken carebear's miserable behavior? 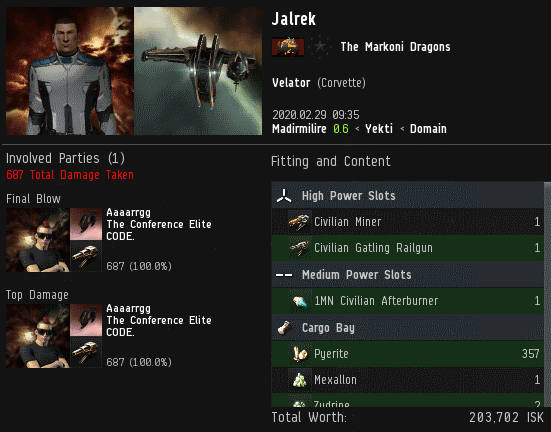 All those tears over a rookie ship. Silly carebears. If you're going to spray racial slurs all over local chat, you should at least be mourning the loss of a Retriever!
Posted by MinerBumping at 18:01