The anti-Code carebears claim that our Agents are griefers, bullies, and torturers. "Of course they're bullies," say the carebears, "How else could they coerce someone into buying one of their fraudulent 'permits'?" 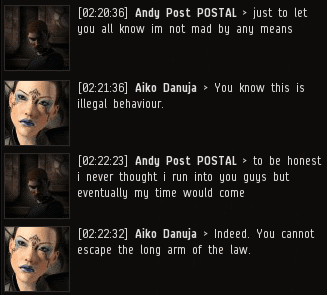 But the truth is, many unlicensed highsec miners are fully aware that they must buy a permit. They're simply waiting their turn to be ganked. 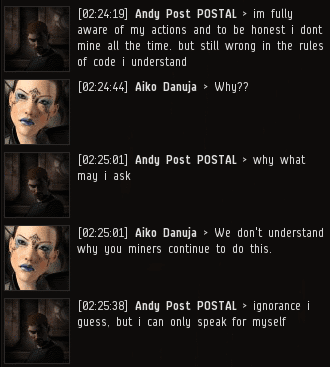 Andy Post POSTAL lost a Mackinaw and a 792 million isk pod. Unusually, his Mackinaw had been equipped with an Abyssal Damage Control. 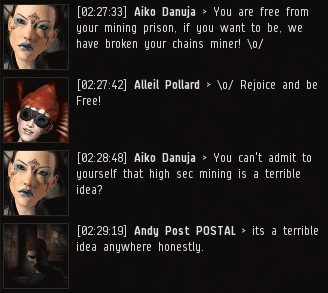 One might expect a miner such as Andy, upon being ganked, to go postal. But he couldn't be mad; he was beyond all of that now. Andy had known all along what his fate would be. 'Twas only a matter of time. 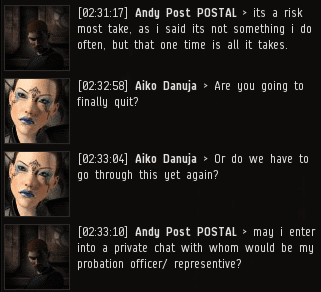 Eventually, justice caught up with Andy, as it does with all who violate the Code. There was no sense in trying to run from destiny any longer.

Agent Aiko Danuja was pleased to hear Andy make a full confession of his crimes. A lot of miners confess, but mostly they incriminate themselves by accident. 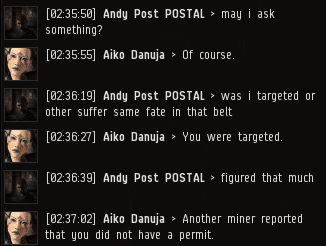 Failing to obey the Code is a foolish mistake; punishment is inevitable. Our Agents have eyes and ears everywhere in highsec.

Once they put aside their self-serving biases, all miners recognize that the Code is just.

Andy knew, intellectually, the truth of highsec. Now it was time to translate his knowledge into action. 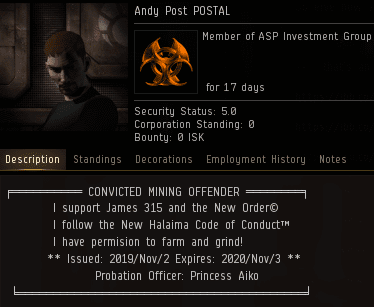 ...And that meant buying a mining permit. A few permits, actually. 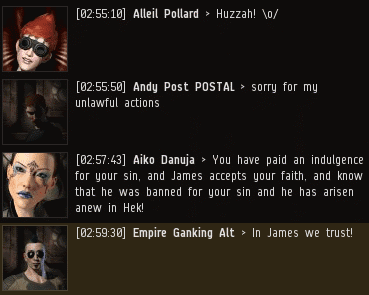 As always, the sale of a mining permit (or three) is cause for celebration. Only a grouchy anti-Code carebear would think otherwise.

Andy opened his arms to the Agents of the New Order. For they were the ones who fight to save highsec. 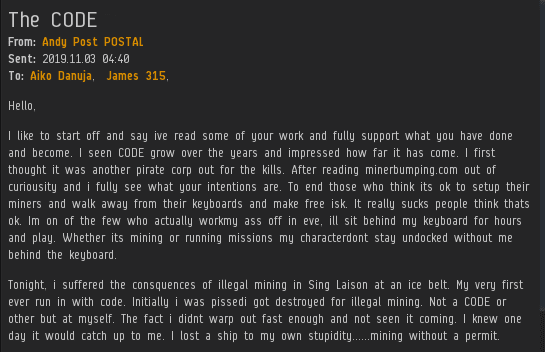 Next, Andy composed an EVEmail explaining himself and sent it directly to the Saviour of Highsec. 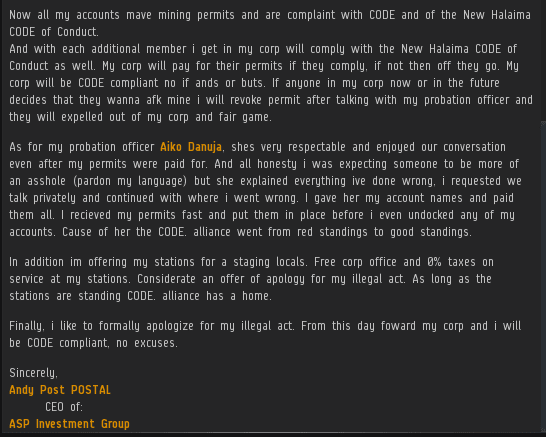 Unlicensed carebears could learn a lot from a guy like Andy. When you lose your Mackinaw, there's no point in spewing a bunch of real-life death threats and racial slurs in local chat. No, the better option is to admit you're totally guilty and to toss some isk to your ganker.

Even so, the wiser course is to obey the Code from the beginning--and avoid being ganked at all.
Posted by MinerBumping at 18:03