As part of his mission, Knowledgeminer had guided Agent Lewak to the location of a nest of Silent Company miners. The presence of a known Agent in local made the miners restless.

Agent Lewak had no intention of harming the miners, though obviously those who disobeyed the Code would be killed. Lewak's primary purpose, though, was to provide the ignorant masses with valuable knowledge.

Although they claimed to be newbies and "returning players", Silent Company miners immediately bristled when Lewak mentioned CCP's famous study about the effects of suicide ganking.

(Each time that article gets linked in local chat, another highsec miner--or two, or three, or more--feels humiliated. It's a good way to root out bot-aspirants in a system.)

As usual, the carebears refused to accept the truth, even when delivered by CCP itself. They even questioned whether CCP's own presentation by a CCP employee at a CCP event was really endorsed by CCP. 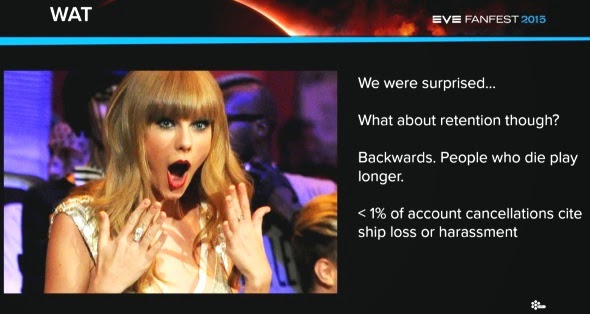 Indeed, it can be argued that CCP Rise, who wrote and delivered the presentation, has harvested more tears from the highsec miners than any other developer.

Knowledgeminer had spent years in the Anti-Ganking movement. He had loyally served their cause. Now he was confronted by the full force of the miners' stupidity and ingratitude.

Dirty Dan Redneck insisted that anyone who challenged him or questioned his way of thinking was required to pay for his subscription to EVE. What a Goofus.

In a way, it's a good thing that Dirty Dan didn't live in nullsec. Imagine how many people would owe him $15.

This wasn't the first time Knowledgeminer had encountered foolish miners; the Anti-Ganking channel was infested with many such creatures. But the true scope of the miners' degradation was only visible to a ganker. Knowledgeminer saw highsec with new eyes.

A mob of angry miners surrounded him. What had Knowledgeminer unleashed upon himself?