You know, there are plenty of reasons why one should never use blingy mining drones in highsec.

After all, drones get ganked, too. 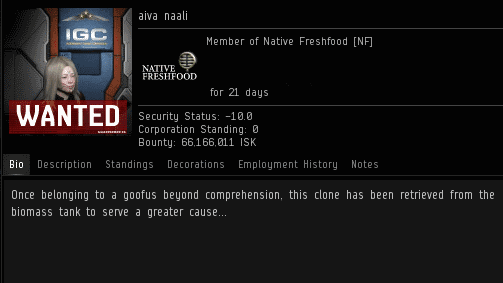 Once upon a time, the aiva naali character belonged to someone else. When the original owner biomassed aiva naali, this much sought-after name was claimed by an Agent of the New Order.

Leo Attora was an unlicensed Orca pilot who enjoyed using blingy drones to mine in highsec. One day, his precious drones disappeared while he was AFK. Luckily, aiva 2.0 was there to explain everything.

When it came to mining permits and the Code more generally, Leo was a procrastinator. But he understood that the ganking of his drones foreshadowed an even worse fate: It was only a matter of time before his Orca was destroyed, too. Time to get right with the Code.

aiva invited Leo to the "Why Was I Ganked?" channel. The miner introduced himself as a fan of the New Order.

Leo made every effort to convince our Agents that he desired to become Code-compliant. So far, so good. But our Agents have been burned before. Sometimes a miner will buy a permit in an attempt to fly under the radar--so that they can violate the Code undetected.

Leo linked his Orca fit, which contained a number of ECM modules. In highsec, these are sometimes used by anti-Code carebears who want to interfere with ganks.

The miner was giving off mixed signals. It was our Agents' job to figure out whether he was a potential Gallant--or an inveterate Goofus.

Agent aiva had done her part. The matter was forwarded to additional Agents for review.

Leo admitted that he wasn't sure whether his blingy drones had been scooped or destroyed. Undoubtedly the miner had been away from his keyboard when the Code enforcement action had taken place.

After a time, Agent Jenny Melons arrived, ready to help clear up the mess.

Then, at a critical moment, Leo expressed a stunning lack of faith.