Previously, on MinerBumping... Anti-Ganker Knowledgeminer and New Order Agent Lewak fought back against Silent Company's insidious "Highsec Lobby" initiative. Knowledgeminer attempted to explain that his quarrel was not with the miners; it was with the Silent Company leaders who exploited them. Upon hearing this explanation, the miners grew angry and turned against their old friend.

Though Knowledgeminer repeatedly explained what was wrong with Silent Company's lobbying effort, the miners refused to listen.

Knowledgeminer and Agent Lewak found that trying to have a conversation with a Silent Company miner was like talking to a wall--one made of bricks of Veldspar.

Curiously, some miners took hold of the notion that anyone who told them what to do ought to pay their EVE subscription. Yet it was the miners who owed our Agent money.

Lewak came to understand that Silent Company was even worse than the average carebear alliance. It had become a magnet for the scum of highsec.

Dirty Dan Redneck felt that he should only be expected to improve as an EVE player if someone else paid him to do so. Then there were those like Rodigus Sharisa, who openly desired to become a bot. Silent Company was some sort of Goofus club!

It was obvious that Silent Company's leaders weren't informing their miners about the Code. Nor did they teach them basic EVE game mechanics. The alliance didn't serve its members. Instead, it simply engaged in mass-recruitment in order to promote its "lobbying" nonsense.

In the end, most Silent Company miners chose to remain ignorant. They cursed Knowledgeminer for attempting to help them. 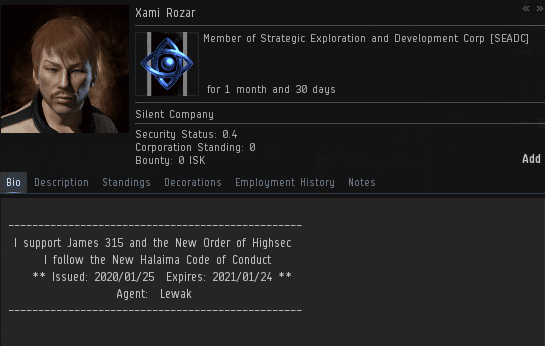 However, some miners contacted Agent Lewak and quietly requested to purchase a mining permit. They had watched too many of their comrades die needlessly in the asteroid belts. 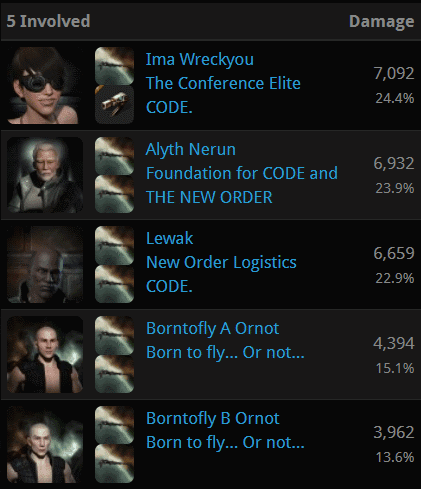 Knowledgeminer saw that the Code was as powerful as the New Order's Agents had always claimed. On his Born to fly... Or not... alts, he joined gank fleets and killed Silent Company's unlicensed miners. 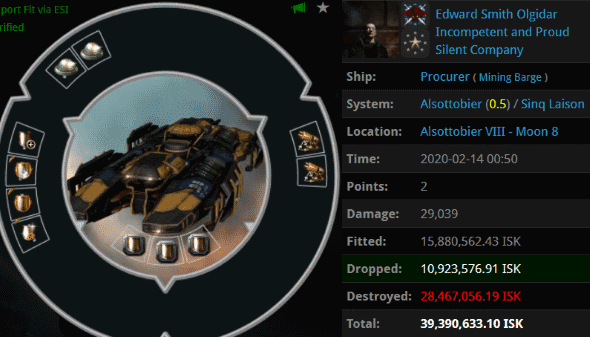 Knowledgeminer saw that he was making an impact--not merely harvesting tears. For example, after this Procurer pilot was killed... 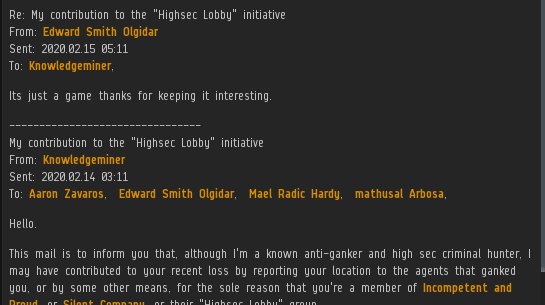 ...The pilot thanked Knowledgeminer. Slowly but surely, he was getting through to people.

And that, in the eyes of his fellow Anti-Gankers, was the ultimate crime.

Before long, Knowledgeminer found himself excommunicated from the Anti-Ganking "community".