"But nobody ever told me I needed a permit," sobs the unlicensed miner after he gets ganked. "How was I supposed to buy a permit if nobody warned me?" 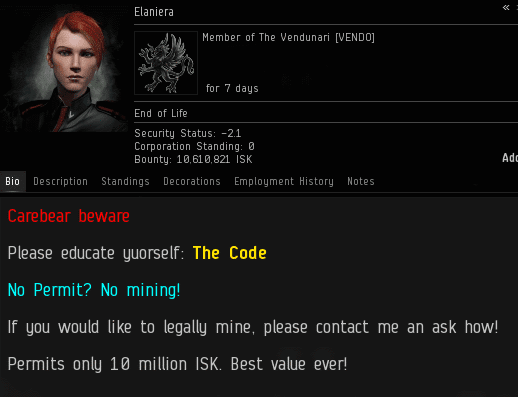 Agent Elaniera heard the cry of the miner. So she travels across highsec, warning miners in advance that they need to buy a permit--or get ganked. But how do the miners respond to such warnings?

Judging by Jeyson Dantas' reaction, they don't appreciate it. And this particular miner had good reason to believe Elaniera's warning, since she had ganked him before. Nevertheless, Elaniera was filled with compassion for Jeyson. She penned a heartfelt reply:

Now Jeyson knew two things: He needed to buy a permit, and he needed to calm down. Would the miner be able to accomplish at least one of those things?

Through no fault of her own, Elaniera had come close to sparking a major diplomatic incident. Jeyson had powerful friends in the consulate. If pressed, this miner could take down CCP itself.

The last thing our Agent wanted was for CCP to be banned from Jeyson's country. Yet the rules set forth in the Code were too important to be ignored, even in the context of high-stakes international diplomacy. And the simple fact was that Jeyson still needed a permit.

One can only hope that CCP has good lawyers and diplomats on its payroll. 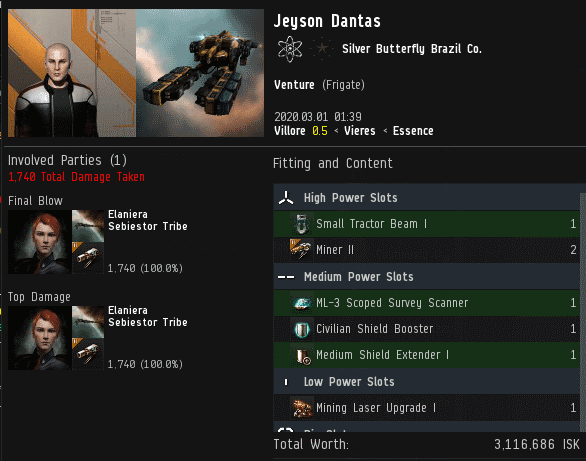 Since Jeyson had chosen to escalate the matter by encouraging rebellion in local chat, Agent Elaniera had no choice but to terminate his vessel.

Jeyson vowed to retaliate by bringing CCP into the picture--presumably before he expelled them from his country.

The Code was clear, yet Jeyson was confident that he would prevail in a court of space law.

I don't know what country Jeyson's parents rule, but in highsec we do things a bit differently. In highsec, we obey the Code. Period.

The Code's principles and values are universal. Hopefully, one day Jeyson's parents will find it in their hearts to adopt the Code in their country. It would be historic.
Posted by MinerBumping at 18:05