Previously, on MinerBumping... Unlicensed Orca pilot Leo Attora lost his blingy mining drones while AFK. Sensing that his Orca was in danger of suffering the same fate as his drones, he expressed a sudden interest in buying a mining permit. 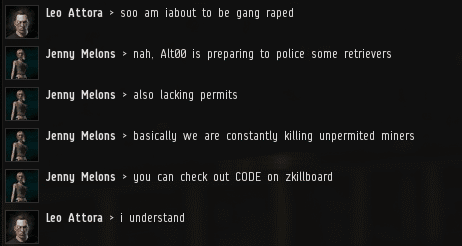 While Agent Jenny Melons made arrangements to sell a mining permit to Leo, awful doubts began to creep into the miner's mind. Jenny did not hide anything from Leo; it was absolutely true that the mighty CODE. alliance was constantly slaughtering unlicensed miners.

Perhaps Leo felt he was a bit safer than the average miner, since he was in an Orca and not a thinly tanked Retriever. If so, hearing our Agents talk about their firepower should have reminded him that no Code violator is safe.

Leo was required to meet up with our Agents and submit his unlicensed ship for inspection.

Once again, Leo was stricken with fear and doubt. Needless to say, he did not have a ton of faith.

...On the other hand, Leo's apprehensions did not inspire action on his part. He meekly obeyed instructions--trembling all the while. 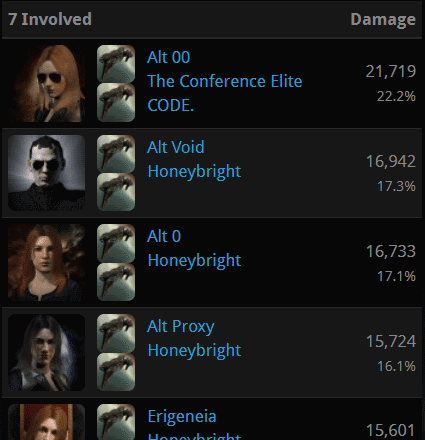 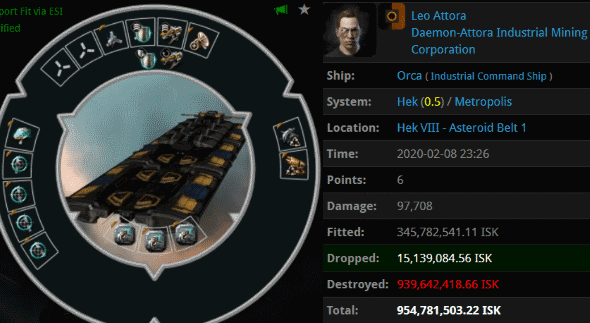 The results were in: The Orca was found not to be in full compliance with the Code. So Leo was punished for it.

Leo was astonished by what had happened. He'd assumed that he was going to hand over a small amount of isk and be on his merry way. In shock, he had no idea how to respond.

Meanwhile, the Hek system lit up with the news of the Orca gank. Leo's own corpmate, Prophet of Kek, condemned him in local for losing the ship.

The local miners had no sympathy for Leo's plight. Indeed, they assumed he was AFK. But, as we know, Leo was at his keyboard and preparing to purchase a mining permit. Was he as guilty as he looked--or was his journey toward Code-compliance cut short? What happened in the next few moments would reveal everything.