Previously, on MinerBumping... Leo Attora's Orca was deep-scanned by a group of Taloses that tore it to bits in the process. The mighty CODE. alliance had triumphed over Leo's Orca, but was it a fair kill?

In Hek, the locals criticized Leo for losing his Orca. Even Leo's own corpmate, Prophet of Kek, thought the worst of him.

Although no one expressed any sympathy for Leo, reaction to CODE. itself was mixed. Some grumbled, while others in Hek tossed some isk to their local gankers. 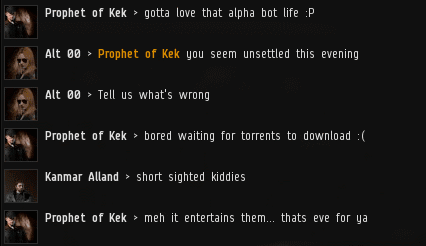 It seemed that everyone had an opinion on the gank and the Agents who had pulled it off. Notably silent, however, was Leo himself.

Other than Leo's initial, shocked reaction in a private convo with Agent Jenny Melons, the Orca pilot was mute.

Leo had, of course, been seeking to buy a mining permit at the time of his gank. As the world moved on around him, not so much as a request for reimbursement was to be heard from him. Had the miner learned his lesson--even if many of the onlookers had not?

Every miner who gets ganked had a choice: He can turn his life around and become a Gallant, compliant miner... Or he can do the other thing. Finally, Leo spoke:

Leo chose the path of the Goofus. In so doing, he condemned himself. But how far would he go? 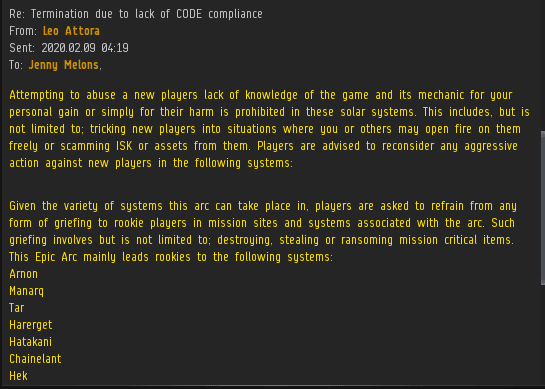 Sometimes a miner seeking to buy a permit is presumed to be acting in good faith. But our Agents have learned from experience that a permit does not always signal a truly Code-compliant spirit. When miners get ganked, they tend to show their true colors. Now it was Leo's turn.

Leo sent Agent Jenny an astonishing EVEmail that seemed to hint at the miner's intention to file a petition against her. If so, Leo had never been sincere in his desire to obey the Code.

Leo tore off his mask and revealed himself to the whole world as a bot-aspirant Goblok: A new player with 35 Orcas. 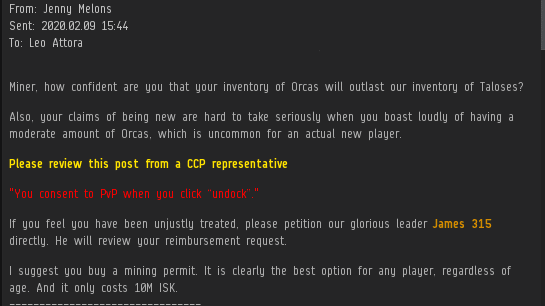 Jenny was not intimidated by Leo's threat to file a frivolous petition. She stood her ground like an Agent.

With each new EVEmail, the true depth of Leo's guilt became more apparent. He declared himself a wallet warrior--and a puzzling one at that. Why would someone pay real money to buy isk so that he can purchase an Orca (or 35 Orcas) to very slowly make isk in highsec?

Agent Jenny politely but firmly instructed the miner to obey the Code. She wasn't going to be banned, but Leo was going to be ganked again if he didn't change his ways.

The fact of the matter is, Hek is a highsec system and is governed by the Code. Our Agents will not ignore Code violations that take place there. If anything, Hek will get more attention in the future. Be warned, carebears!
Posted by MinerBumping at 18:02