After all this time, carebears are still blowing billions of isk on bounties. I warned them against such waste even before the current bounty system was put into place. Still they throw away their money. The good news is that our Agents can collect these bounties by firing on each other at the conclusion of a gank. The bad news is that lazy carebears' disinterest in game mechanics is another sign of rampant bot-aspirancy.

Cassidy Langley had a grudge against Agent Tisiphone Dira. Our heroine did what the New Order does best: She taught the carebear how EVE works. Cassidy didn't care. Why would a carebear want to know the rules of the game they're playing, right?

Once again, the highly trained Agent was able to elicit a full confession from the carebear--without resorting to the use of torture.

Cassidy spilled the beans: She wasn't a dangerous bounty hunter; she was down to only three ships. She'd lost almost all her isk on "gambling".

The carebear was destitute. Agent Tisiphone took pity on her, and discouraged her from wasting time on PI. The New Order to the rescue, as usual.

Now Cassidy was down to two ships. She should've spent her isk on a mining permit, rather than gambling. Indeed, flying around highsec without a permit is the most deadly gamble of all. 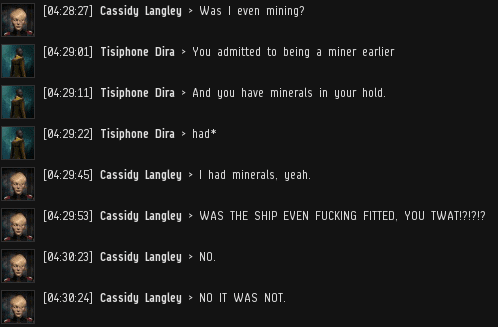 Little miss motor-mouth admitted to another crime: Fail-fitting her ship.

Cassidy vowed revenge on the New Order. She would find some way to defeat us, using either her Venture or her Catalyst. Or maybe her Venture would get ganked, and she would join us to gank miners with her Catalyst.

There are some misguided people out there who read MinerBumping and find themselves identifying with the criminal miners. If you see Cassidy as a poor, defenseless newbie, maybe you think she was wronged by Tisiphone. Think again. Tisiphone remained in local and observed the following interaction: 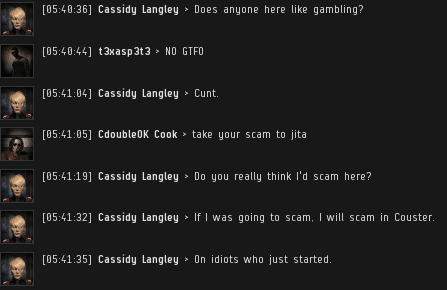 So much for protecting the new players, eh? Seems that's our job.
Posted by MinerBumping at 01:21