All the active members of the corp had testified and confessed to treason.


TheInternet TweepsOnline TheInternet > Alrighty, well I think that a wardec is in order, from my neutral perspective. If this group of players is as anti-CODE as they claim to be, I think it is only fair that CODE. initiates a wardec campaign.
Iceman Alabel > well all stand by our corp leadership
Chocolate Mooses > I agree. With the council's permission, I will get that process started.
HotShotX Warcastle > The defense has no objections.
captill > do you all get what you wanted now

Sometimes you have to know when to cut your losses. HotShotX, the public defender who had been appointed to represent the miner, could only leave his client to his fate. War was imminent.

As the members of The Blind Eyes in the convo looked on, the gears of justice began to turn. The New Order functions as a well-oiled machine. The impartial arbitrator of the hearing, TheInternet, had done his duty.

At the last moment, just before Chocolate Mooses filed the paperwork for a wardec, the possibility of a settlement was discussed. But the CEO of The Blind Eyes refused to buy a permit. His decision would have terrible consequences for his corp members.


TheInternet TweepsOnline TheInternet > Why must you be so resistant to comrpomise? I am trying to help you
Aria Ito > Extortion is trying to help People?!
Aria Ito > Im a EMT I help ppl. Fuck you.
captill > the fact that you are extorting ppl is our problem with the code
Chocolate Mooses > Aria this is a video game, not real life - please keep your real life job out of it.
Aria Ito > Thats bs your words are real as are the ppl here. Be mindful of them.

Aria Ito was one of the corp members who testified to harboring anti-Code opinions in her heart. She claimed to be an EMT in real life, which was relevant for some reason. The New Order officials in the convo were unmoved.


Chocolate Mooses > Any members leaving corp and joining a new corp will find the new corp decced, and be referred to you guys to explain why.
captill > no new corp like you all saw in my bio the blind eyes is my baby
HotShotX Warcastle > You are a terrible father, then.
captill > father i never saw myself as that
captill > my babe is breed for war
Chocolate Mooses > War: Erik Sarn Corporation vs. The Blind Eyes

The corp CEO said his "babe" was ready for war. Only time would tell. And this blog. 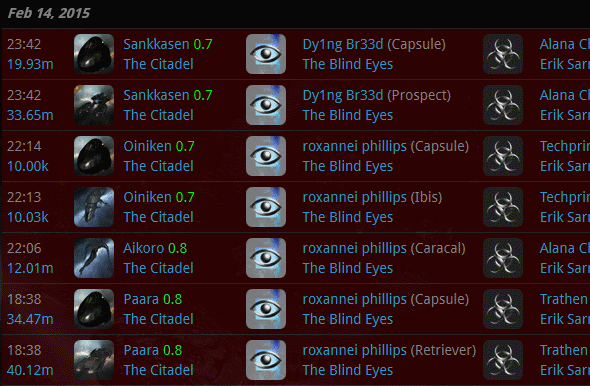 The next day, the Erik Sarn Corporation's wardec went active. The Blind Eyes corp was taken completely by surprise. They suffered several losses.

Although The Blind Eyes' activities were curtailed by order of their CEO, additional losses were suffered the next day, too. For the next few days, they docked up. 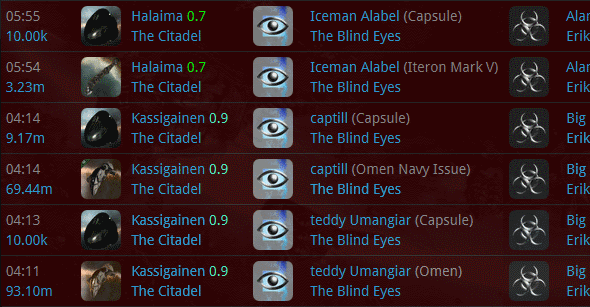 After a few days without any PvE, The Blind Eyes grew desperate, and attempted to mount a resistance fleet against the New Order corporation. They were slaughtered. 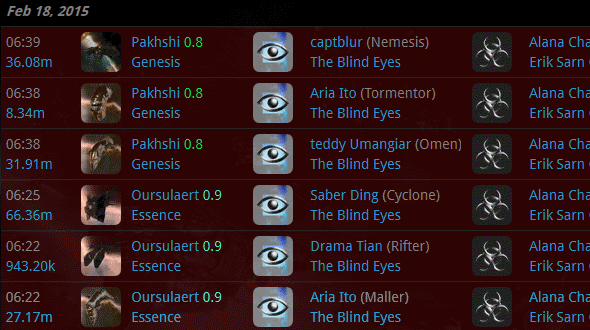 Then they reassembled and tried again, this time with several combat ships working more closely together. Agent Alana Charen-Teng solo-killed them all. The Blind Eyes were annihilated. 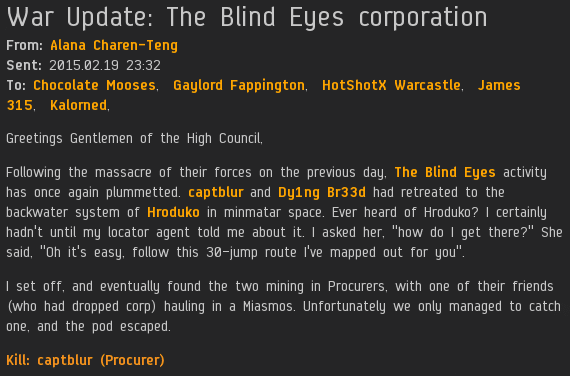 The carebears crawled back into their holes. Alana had to work quite hard to find any evidence of The Blind Eyes activity in highsec. Eventually, she discovered one of their Procurer pilots in a backwater system. 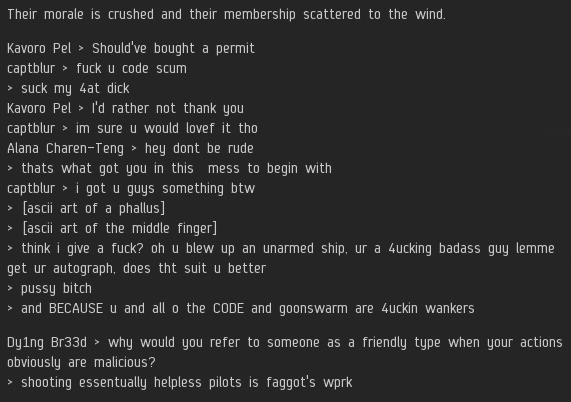 The Blind Eyes were reduced to a truly pitiable state. At this point, buying mining permits started to sound like a good alternative. 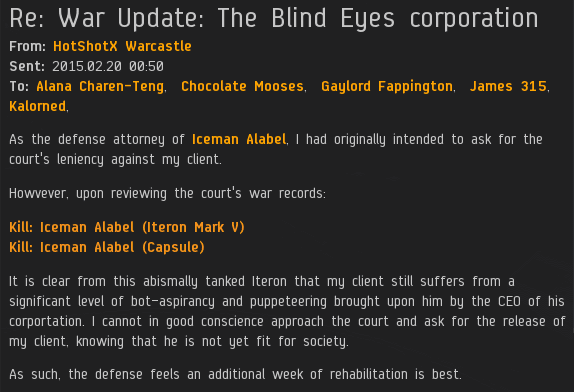 HotShotX continued to seek the best possible outcome for his client. Under the circumstances, the only way Iceman would learn his lesson was to suffer through another wardec. 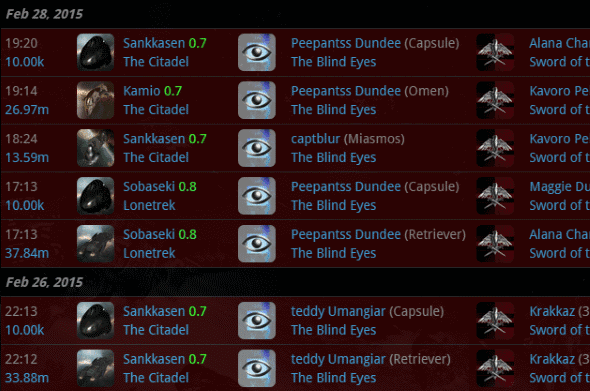 Alana's new corp, Sword of the Saviour, went to war against The Blind Eyes. Once again, the anti-Order corp was repeatedly ambushed and destroyed. 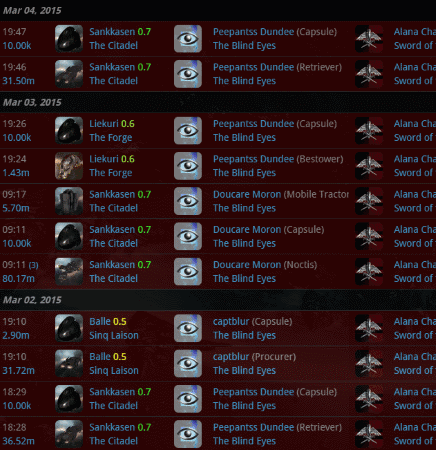 Needless to say, the war didn't go so well for The Blind Eyes. Rebelling against the New Order cost the carebears everything. But in the end, justice was served--with a side order of antimatter. The system works. Bon appétit!
Posted by MinerBumping at 20:55