Seventy-four Grab Bags in, and miners are still learning the basics of highsec!

As I've said before, never ask an Agent a question if you don't want to hear the answer. And to answer Bigg Meatius' question:

If you've ever wondered why it's taking miners so long to master the fundamentals of modern highsec life, look no further. Don't quit at the preamble--dig deep!

In game. He hopes Agent Reginald Poppycock's house burns down and his whole family dies, in game. 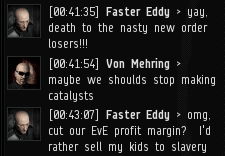 That's Anti-Ganker humor for you. On the other hand, there are miners who make their toddlers mine for them. Many a true word is spoken in jest.

Waegen Hoerford heard some disturbing rumors about one of our fine Agents. He was reassured that cyber-bullying was not something the New Order does.

...But Waegen warned him that any day now, the Goons will switch sides in favor of the highsec carebears. File this under "CODE is dying." We're seeing more of this sort of thing lately; it's becoming almost as common as "EVE is dying." Carebears of highsec, I can assure you that EVE will die before the Code does. 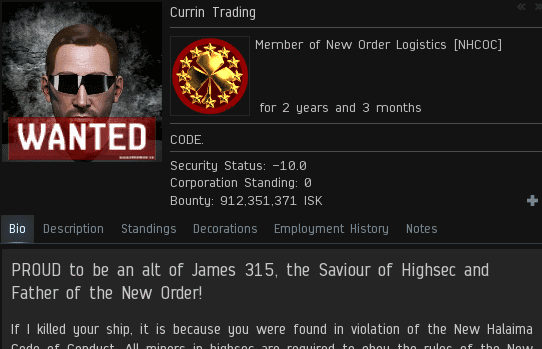 As everyone knows, Currin Trading has much to be proud of. However...

...Not everyone in highsec is a patriot. Unsurprising. The PvE'ers don't know what pride is. After all, how could they? Buying a New Order permit and getting right with the Code is the first step.

Another example of the carebear dichotomy: They love to lie, but they can also be made to confess their crimes so easily. 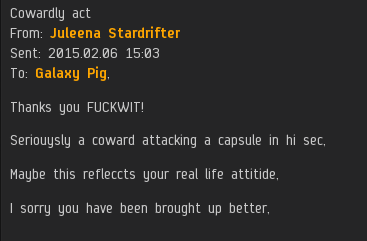 Carebears are so full of contradictions. If they make a real-life death threat, it's only due to evil gankers. If we shoot a Capsule, that reflects a real-life attitude. 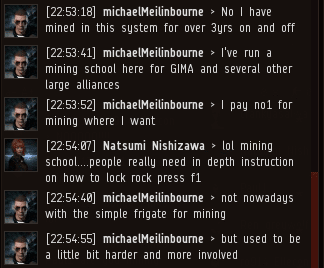 Most miners are far from being the "new players" we always hear about. Some are so old that they've become revisionist historians. One claimed that mining used to be a complicated, respectable profession!

Indeed, some miners claim to know the secret history of the New Order. dav Uitra says that before the Code, I made players want to kill themselves. You know, the usual. But this has been censored from the official New Order history books.

The truth is out there, man. Really out there.
Posted by MinerBumping at 18:18