The news about CCP's study on ganking and new player retention sent a shockwave through highsec. No one outside the New Order expected its conclusions, which flew in the face of the carebears' conventional wisdom. 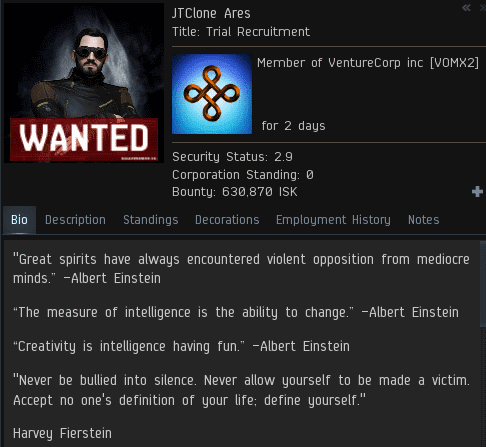 Indeed, the carebears were expecting news of a rather different kind. Just days before FanFest 2015, nefarious rebel leader JTClone Ares was in a secret channel with Jennifer en Marland. For some reason, he also invited Agent Natsumi Nishizawa to the channel.


Natsumi Nishizawa > so JT is this channel ever gonna be used for anything more than a cuddling place ofr me and jennifer?
Jennifer en Marland > please save me from the cuddles
JTClone Ares > sorry about that
JTClone Ares > socket crash
JTClone Ares > it seems from the intel from a friend who is high up there in the eve politics

Out of nowhere, the rebel leader disclosed an extraordinary secret: He had friends in high up there places. In EVE politics. In addition to enjoying his friend's friendship, JTClone had access to intel.

According to JTClone's highly placed source, CCP discovered new evidence "rising up". For the first time, there was solid proof that CODEdot was run by Goons with bots who were driving away new players. Rebels long suspected this was true, but to have evidence...!

Having dropped this bombshell, JTClone casually asked his fellow channel members what was new.


Natsumi Nishizawa > ummm you do know that ccp has offically stated there they cant find any link to griefing and causeing noobs to unsub
JTClone Ares > it was the information they did
JTClone Ares > not have proof of
JTClone Ares > and when someone was about to show proof idk what happened.
JTClone Ares > so new info has risen so they will take action later on though

Our Agent challenged JTClone's intel. But JTClone confirmed that the info had "risen". Indeed, on an earlier occasion there had been proof available, but at the last moment before the proof was presented, something had happened. Luckily, the new info rose up.


Natsumi Nishizawa > https://forums.eveonline.com/default.aspx?g=posts&m=5504176#post5504221
JTClone Ares > i read
JTClone Ares > there are many reasons for why players unsub
JTClone Ares > i have known many pilots who code has harassed have dropped eve so i got them on steam and now playing different games

Agent Natsumi cited CCP Rise's famous forum post, which debunked the myth that griefers drive away new players. But JTClone was unimpressed. He'd done his own study, on Steam.


Natsumi Nishizawa > yeah so stop pretending that CCP is going to come to the rescue and start banning code they have said time and time again vs a thousand complaints and petitions that Code is well within the eula
JTClone Ares > nah
JTClone Ares > right now its all talk
JTClone Ares > but hey, I only use my intel source for new info and old info. I stopped keeping tabs on code for a while

Nevertheless, JTClone conceded that his intel might be wrong. His source was specialized, with a very narrow focus: New information and old information.

We'll keep you updated as JTClone receives more secrets about EVE politics. Until then, feel free to speculate about the identity of JTClone's source.
Posted by MinerBumping at 23:11