Some days, it ain't easy gettin' justice done in highsec. 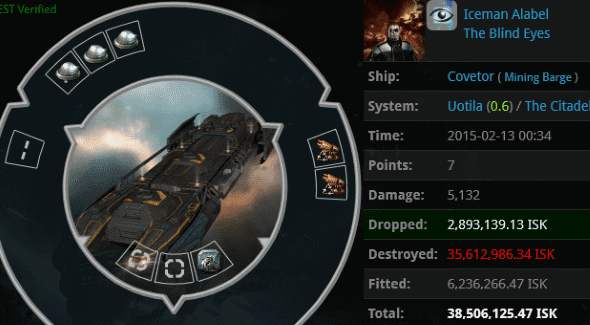 The day began with a promising enough start for Gaylord Fappington, Agent of the New Order. He discovered an ice anomaly and eliminated a threat that was lurking within. After extinguishing the miner, Gaylord offered to sell him a mining permit. As an Agent and a member of GoonSwarm, Gaylord was used to dealing with unruly miners. Iceman Alabel gave him a piece of his mind. It was a bad decision--he had little to spare. Gaylord agreed to refer the matter to an impartial mediator. 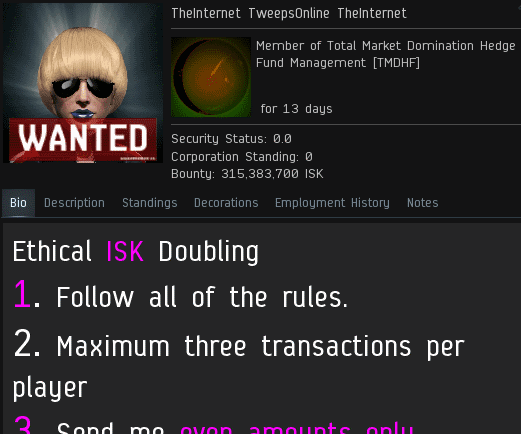 Luckily, a man of honour was not difficult to find.


Iceman Alabel > if i remember right i should get bumped b4 i get poped
Gaylord Fappington > Kill: Iceman Alabel (Covetor) for reference, this is the incident in question
TheInternet TweepsOnline TheInternet > Iceman Alabel if you have any facts you would like established lets hear them now
Iceman Alabel > lets see ishowed up to the belt mined not even one cycle and was poped
Iceman Alabel > no warning that i was "breaking" your code rules

The miner told the story from his perspective. As the killmail confirmed, Iceman didn't get any ice from the anomaly. That's how efficiently Gaylord was able to gank him. 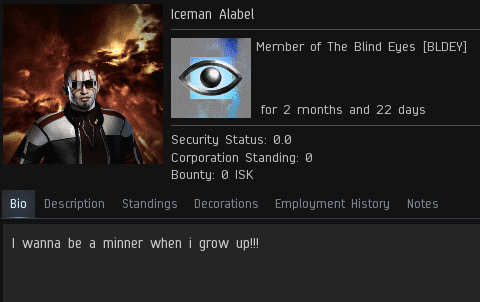 At the outset, it seemed like an open-and-shut case. Instead of proudly sporting a mining permit in his bio, Iceman proclaimed himself a miner-aspirant.


TheInternet TweepsOnline TheInternet > Ah yes, I see that there is a bit of an issue with the bio, now that you point it out.
Gaylord Fappington > And yet, there he was mining, recklessly and with no permit
Gaylord Fappington > I said to myself, 'here is a minor miner, and he's already breaking the rules. I need to act fast before he grows into an afk miner'
Iceman Alabel > on person on and alt account trying to bring in a little ice for cash in not reckless minning

The New Order is filled with problem-solvers. We fix things when they're broken--but we also try our best to stop problems from getting worse.

You know what they say about judging a book by its cover? All Iceman knew about Gaylord was that he was an Agent of the New Order, a Goon, and that he'd ganked him. Based on nothing else, Iceman condemned Gaylord. He didn't bother getting to know him.


Iceman Alabel > but to be fair my hatrid toward the goons comes from b4 the NO was even a thing
TheInternet TweepsOnline TheInternet > Let's not discriminate against any minorities in this chat, please, Iceman. That would include reaffirmations of the prior inflammatory statements you have made.
Iceman Alabel > is was just explaning that comment
Gaylord Fappington > How long have you been playing Eve?
Iceman Alabel > 4 years

The risk/reward imbalance in highsec continues to take its toll. Even though Iceman was a relatively new alt, he admitted that he was a veteran EVE player. And still, he was mining highsec ice with a fail-fit Covetor. He needed Order in his life.

Snap judgments seemed to be Iceman's specialty. Without even meeting me, he was sure he didn't like me. Also, Nazis.


Iceman Alabel > how was i the biggest threat when you had someone multiboxing in the same belt?
Gaylord Fappington > I bet TheInternet TweepsOnline TheInternet could sell you a shiny new permit right here on the spot
Iceman Alabel > ya im not paying gankes either
Gaylord Fappington > Iceman Alabel , I just took the liberty of getting you an attorney
HotShotX Warcastle > Good Evening.
HotShotX Warcastle > May I have a moment with my client, please.

In spite of everything, Gaylord took pity on the miner. Knowing full well that he could be jeopardizing his own position in the mediation, Gaylord located an attorney for Iceman. Not just any attorney, either--it was HotShotX Warcastle, a hotshot space attorney.

HotShotX was a public defender. Mostly he defended the public by ganking bot-aspirants. Though HotShotX had a great record, Iceman wasn't sure he trusted him, due to his affiliation with the New Order. Another book judged by its cover. HotShotX assured the miner that he could get results.