Born into the Code

Enforcing the Code and teaching carebears about EVE often involves doing things to the carebears that they don't like. Does it make a difference, though? Are we transforming highsec, or merely griefing it? Let's find out.

It was another day on patrol for Agent Tisiphone Dira. Before she got a word out, the carebear confessed to violating the Code. Case closed.

Carebears love to make excuses for being AFK: Fixing a neighbor's plumbing, having diabetes, getting a hand amputated, etc. Most unseemly are the carebears who blame their Code violations on their children.

Albert Hoffstein confirmed that he went AFK because of a baby. How does a seasoned Agent respond to that?

You can tell that Tisiphone knows the Code backwards and forwards. An excuse for violating the Code is always, in the final analysis, an opportunity to follow the Code.

I would encourage anyone with a baby on the way to push their partner toward naming the child James, in honour of myself. Especially if it's a boy. I offer this suggestion not out of self-promotion, but to help normalize the culture of the Code. 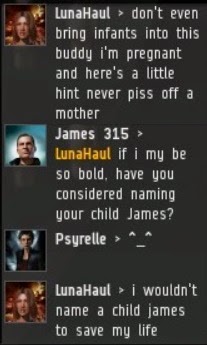 Of course, not everyone is receptive to the idea.

There's more than one way to give birth to change. Consider the story of Matt Issier, a highsec miner who played EVE off and on... until he encountered the Code.

Like so many other miners, Matt was ganked and threatened to quit EVE. When he read MinerBumping, he discovered that he was, in his words, "a dumb carebear". Most carebears come to this realization sooner or later, even if they don't admit it. What set Matt apart was that he knew he didn't want to be a dumb carebear.

Matt joined up with a good group of miners. When they were ganked, they decided to join the New Order and gank other miners. Player retention ahoy!

The truth is, the New Order does make a difference. As a direct result of our actions, countless players have learned how to enjoy EVE. If it weren't for the Code, EVE would be a very different place today. 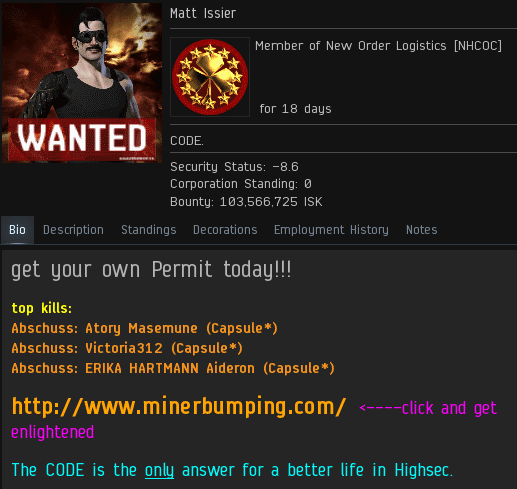 Let us return to our earlier question--do we transform highsec or grief it? Look at Matt Issier and you'll see the answer as plain as day. We transform it. We transform the heck out of it!

And that's why every fight that the New Order fights is a good fight.
Posted by MinerBumping at 18:04