There are some systems in highsec that almost everyone knows about: Jita, Amarr, Dodixie, Hek, etc. They're well known because they're trade hubs that hundreds of thousands of EVE players use. But there are also highsec systems that became well known because they were the site of famous New Order victories--systems like Halaima, Uedama, Kino, and Gamis. Those systems were not noteworthy in and of themselves, but they became special because someone cared enough about them to enforce the Code there. 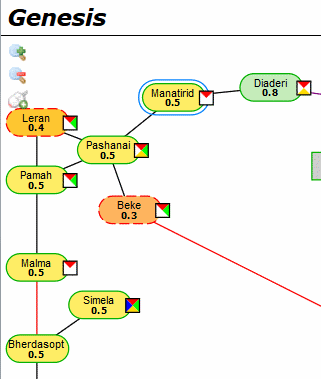 There are a lot of so-called "backwater" systems in highsec. Consider Simela and its environs. You've probably never been there. Most likely, you weren't even aware of its existence. Nevertheless, highsec is so crowded that even a distant corner such as this is populated by miners. Unfortunately, some miners think obscurity is security. They think that they don't need to follow the Code because no one has heard of the place where they mine. They're highsec hipsters. 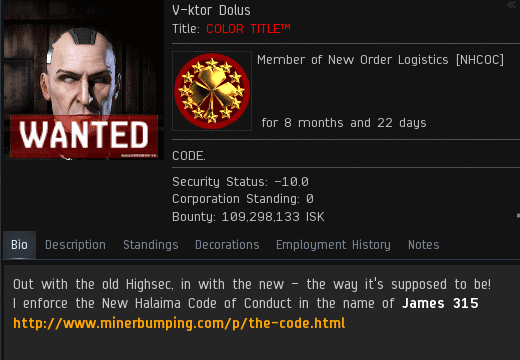 That's where our Agents come in. People like V-ktor Dolus believe in the value of good, honest work. They travel to the quiet little systems and remind the miners that they live in New Order territory--that the Code is their Code, too. V-ktor recently took a trip down memory lane, reaching into his EVEmail inbox to chart the slow advance of civilization in Simela and the surrounding area.

Miners like PieRatt were rough around the edges. They didn't know how to act when an Agent of the New Order came to town. In the span of a few minutes, PieRatt wrote a tearmail, thought better of it, and then wrote another.

And another, and another. That's how primitive life is in some places--they don't even know how to cry properly. 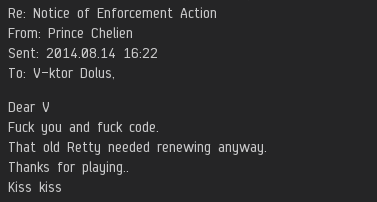 Hatemail is only the beginning of a conversation. They're cries for help. No one who knows how to play EVE properly is going to write you an EVEmail like Prince Chelien's. So V-ktor told the Prince that his ship wasn't fit properly. V-ktor's honesty was rewarded: 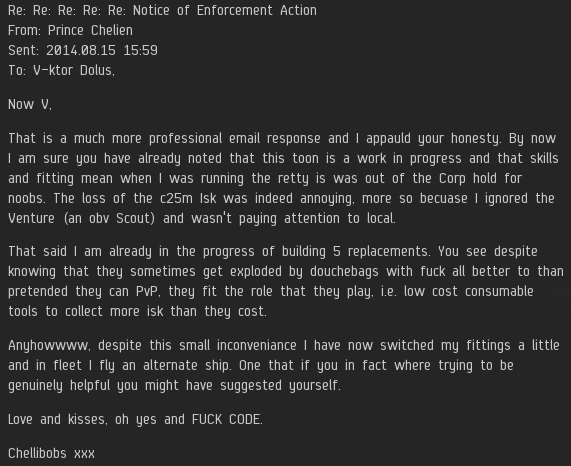 As you can see, even someone who initially hates the Code can learn to respect our Agents. Why? Because they're the only people who bother help miners learn how to play the game.

Pennelope Maricadie loves to brag. When someone else does something impressive, she always has to one-up them. For example, V-ktor ganked her mining ship. Pennelope said she would destroy all of his ships. V-ktor brought her back to reality by reminding her that her threats were empty. Here's how she answered: 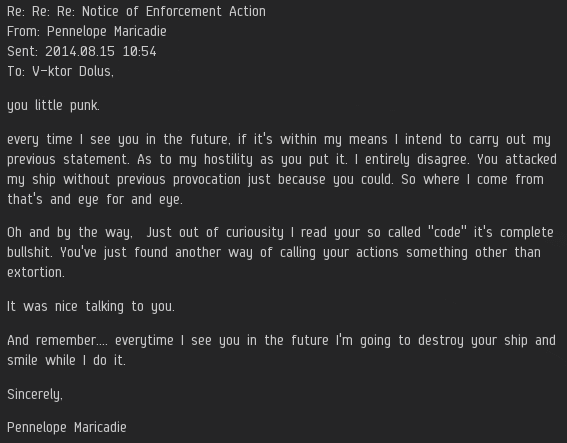 Pennelope was stuck in her own little world, not accepting the Code-fueled reality that the rest of us live in.

Then there are the miners who admit to being curious. Good. Here's the problem, though: It's hard to find the answers you need, if you don't know the right questions to ask. 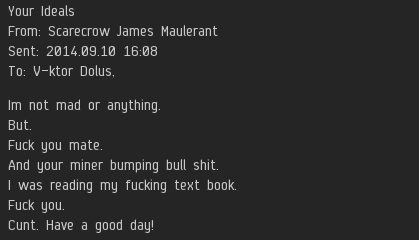 The journey continues. The more remote the location, the more miners you'll discover who are rough around the edges. Only with the utmost patience and dedication are they hewn into my image. Which makes it all the more rewarding in the end. Do you have what it takes to save highsec?
Posted by MinerBumping at 18:02