The Best Ship in the Game

But they do put a little effort into trying to capture the moral high ground. When an Agent of the New Order kills a carebear, the carebear balks. He demands an explanation. And yet, it is the Code violator who must justify his illegal behaviour.

Agent Tisiphone Dira ganked Dworecki, who was autopiloting in a pod. Tisiphone was indignant. She demanded the gank victim explain himself.

Dworecki was stunned to realize he'd been ganked. Until Tisiphone brought it up, he didn't even know it had happened. That's how oblivious the carebear was.

Now Dworecki was on the defensive. He had to account for the actions that had led to the loss of his pod.

As usual, the carebear was without excuse. He had no good reason to violate the Code. He simply assumed highsec was 100% safe.

A good Agent always takes an opening when it's provided. Dworecki asked who I was. Tisiphone recognized it as an invitation. Dworecki got an earful.

Tisiphone rejected Dworecki's interpretation of events and provided one based in facts. The fact was that Dworecki screwed up. Now he had to make it right--which turned out to be a simple, four-step process. 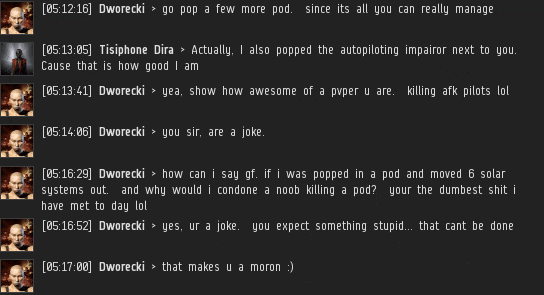 Here's the thing about giving people the full list of things they need to do to correct themselves: It's honest, but it can be overwhelming. Dworecki wasn't ready. Instead of rolling up his sleeves and getting to work, he procrastinated by ranting and raving for a few minutes. (He wasn't angry.)

Tisiphone offered to help, but Dworecki wasn't interested. He knew that even with the Agent's assistance, it would be up to him to do the heavy lifting himself.

The carebear softened somewhat, so Tisiphone went right for the sale.

Nevertheless, Dworecki wouldn't budge. Then Tisiphone offered a new perspective on the game. She was fine with getting only the pod kill, because she cared more about her friends than her killboard stats.

Dworecki was impressed. He was now one respect point closer to joining the Code-compliant highsec community. Their conversation was further evidence that the more time an EVE player spends with our Agents, the more they tend to respect the Code. Time is always on our side.
Posted by MinerBumping at 17:38