The civilized highsec community was aghast to learn about Krimletch, one of the most unruly miners we've seen in recent weeks. He was discovered mining illegally in an asteroid belt and was promptly terminated by Lord Mandelor, one of our Agents. Despite being given the opportunity to buy a permit, Krimletch vowed revenge against the New Order instead.

The New Order isn't known for giving up on people. Krimletch was invited to an informal chat with some of our Agents. However, the chat became a full-blown trial. During the course of that trial, Krimletch made a full confession of his guilt.

In a rare moment of lucidity, Krimletch paid 10 million isk for a permit. However, his misconduct during the trial resulted in the fee being increased, as per the Code's Red Pen provisions. In response, Krimletch filed an appeal, which turned out to be the longest tearmail ever written.

A few days later, while the appeal was still under review, Krimletch was ganked. In his anger, he made the mistake of fraudulently claiming that his appeal had been granted. When the appeal finally reached my desk, I had no choice but to deny it. That's where the matter would have stood. Except... 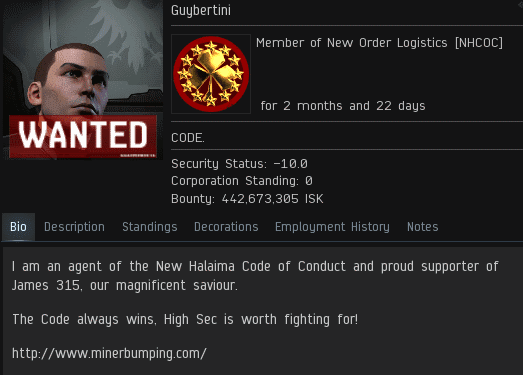 The man who ganked Krimletch before I ruled on the appeal was Agent Guybertini. As should be immediately apparent from his character portrait, Guybertini is a noble warrior who believes in a better future for highsec. After I denied Krimletch's appeal, Guybertini contacted me with new information about the Krimletch case--information I did not have the benefit of reviewing prior to my ruling.

The New Order is not about tyranny, extortion, griefing, bullying, torture, or driving new players away from the game. It is about fairness, justice, and reason. This means that when new evidence comes to light, it must be taken into consideration with an open mind.

Guybertini told Krimletch that he needed a permit to mine. Krimletch claimed he already had one. He also made a bigoted remark about gankers.

Our hero cautioned the miner that he stood to lose his permit if he wasn't willing to respect highsec's authorities. Always happy to reimburse a miner in the event of a wrongful gank, Guybertini requested additional information.

In reply, Krimletch called him a peasant and denied ever having bought a mining permit. Guybertini was stunned by the miner's 180º turn--from a permit-carrying Goofus to a permit-denying Goofus!

The miner vowed revenge. Guybertini admitted that he was skeptical of the threat, since Krimletch was just a miner.

Once again, Krimletch uttered slurs against the ganking community that have no place in modern highsec. So Guybertini reminded the miner of why gankers are so important to the risk/reward balance. Would this convince Krimletch?

Unfortunately not. Krimletch rejected the Code. He even called me a "shitbox", which is a total mischaracterization of me and what I do.

Guybertini saw that he wasn't getting through to the miner. The baton would need to be handed to the next Agent to gank Krimletch.

I considered this new evidence very carefully. Now, I'm the first to admit when I've made a mistake. You'll see this is true, if and when I make a mistake. In this case, the additional evidence provided by Guybertini proved that the system works.

When EVE players enter highsec, they rely on the New Order to treat everyone fairly. They expect justice to be done. Their faith is not misplaced--thank goodness!
Posted by MinerBumping at 22:11