Customer Service by the Code, Part 2

Previously, on MinerBumping... Agent Tisiphone Dira ganked Kali A'mar's autopiloting pod. Kali was furiously calm about it. Tisiphone was undeterred. She would prove to the carebear that the New Order's customer service is second to none. 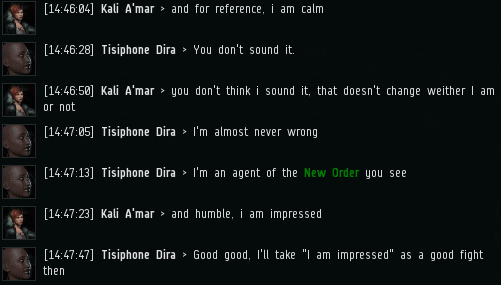 Sometimes carebears need a little nudge in the right direction. Tisiphone knew that the best way to get a carebear into a positive frame of mind is by having one. She showed Kali how easy Code compliance is.

It was then that Kali became philosophical. She stopped spewing profanity and began to really reflect on the loss of her pod. 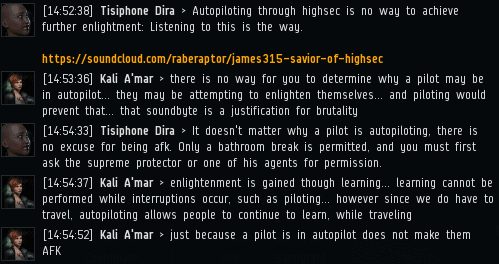 Unfortunately, philosophy can be a very dangerous thing in the hands of a carebear. Kali came up with a crazy theory that autopiloting leads to enlightenment.

The New Order is all about change. Everyone knows this, but Kali didn't believe in the possibility of change! Of course she didn't; bot-aspirants are only comfortable with endless loops. Despite being an experienced Agent, Tisiphone was stunned by how cynical Kali had become.

Kali added another excuse to her list of reasons why she felt it was appropriate to autopilot in a pod--she was downloading study material for school. Apparently she thought this was efficient. Not so! Autopiloting in a pod means you have to slowboat to each gate. If you warp directly, it's much faster. Once you arrive at your destination and dock up, you can focus entirely on your schoolwork.

It's like I always tell the young carebears: You can do homework after you finish your video games.

Tisiphone was astonished by what she heard next. Kali claimed to be at her keyboard, watching her pod slowboat to the gate. She even looked up Tisiphone's bio after seeing her Thrasher sitting at the gate. She could have warped away instead, but she calculated the risk was worth the rewards of slowboating.

Rebels and skeptics may be surprised to learn how many of their fellow bot-aspirants read MinerBumping. That doesn't mean they understand what they read, though. For instance, Kali felt the Code exists because Goonswarm needs an excuse not to go to nullsec. (Maybe she's right about that one--the Goons wouldn't last a day in nullsec.) 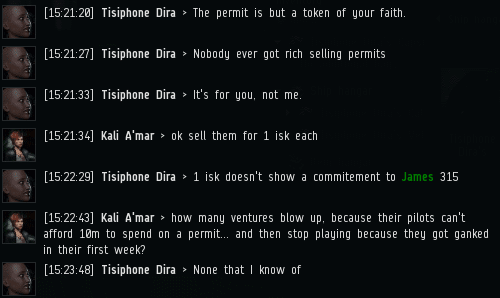 Kali totally bought into the myth that gankers drive new players away from EVE. No less than CCP Rise himself has publicly debunked the myth. That hasn't stopped thousands of highsec rebels from repeating it.

Throughout the conversation, Tisiphone Dira remained the very picture of professionalism. She even entertained Kali's criticisms about the Code, despite knowing in advance that Kali wouldn't make any good points. No one criticizing the Code ever has.

As expected, Kali's arguments had no merit. She seemed pretty worried about smartbombing Rokhs going AFK. According to Kali, you're more likely to go AFK in a smartbombing Rokh than if you're mining or autopiloting. I don't know where she's getting her data, because every study on smartbombing Rokhs that I've read shows the opposite.

Some might say it's a waste of time to talk to someone after you gank them. However, Tisiphone's interview bore fruit: Kali confessed her guilt. Her admission was total. No torture was needed to elicit this confession. The New Order doesn't torture. We don't need to. That's how good we are at this game.

Tisiphone basked in the warm glow of her victory. She'd destroyed Kali's implants and gotten her to see the truth about herself. Winning PvP battles and revealing truth--just another day on the job for an Agent of the New Order!
Posted by MinerBumping at 22:11