Customer Service by the Code, Part 1

A lot of people have misconceptions about the New Order. They see us as a bunch of bloodthirsty rogues who do nothing but spread misery by blowing up defenseless ships.

In reality, that's just the tip of the iceberg. The New Order spends only a fraction of its time engaged in combat. Much of our time is spent engaged in customer service.

After all, it's not always easy to rebuild what has been torn down. When our Agents destroy your ships, you'll need someone to help you pick up the pieces. Who better than our Agents? I mean, they're right there. They have to wait out the 15-minute GCC timer.

Agent Tisiphone Dira ganked an autopiloting pod owned by Kali A'mar. The pod contained over 160 million isk worth of implants. Everyone knows it's silly to autopilot in a pod. Someone would need to be in a state of severe distress or confusion to do such a thing. Tisiphone was concerned for Kali, so she reached out.

Tisiphone brought the carebear up to speed about the rules concerning travel in highsec. Kali, who had some peculiar ideas about what makes a legal system legitimate, dismissively ignored Tisiphone's expertise.

It soon became clear that Kali wasn't interested in being molded into a proper, Code-compliant citizen of highsec. Frankly, she sounded a bit like a rebel--one of those crazy anti-Order types you sometimes hear about.

Kali attempted to downplay Tisiphone's big win by saying it wasn't honourable for a Thrasher to kill a pod. A Thrasher should kill other Thrashers, she said. By that logic, it's only honourable to kill a pod with another pod. If people went along with Kali's ideas, it would mean pods are 100% safe in highsec. Bot-aspirancy ahoy!

Kali demanded to see proof of the New Order's ability to exercise control over highsec. It was courteously provided by our Agent. 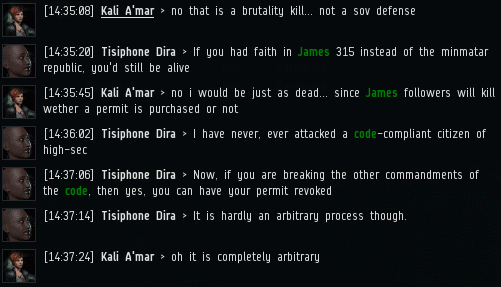 Another common misconception held by rebels is that obeying the Code won't increase your chances of survival in highsec. Rebels don't believe this because they've actually witnessed Code-compliant miners ganked by our Agents; they haven't. Rebels believe it because it excuses them from paying 10 million isk and recognizing the reality of a multiplayer environment with emergent gameplay. They'd much prefer to indulge in their delusions of a safe highsec where they only need to obey game mechanics. Bot-aspirants claim they mine to "relax", but this form of relaxation requires them to exercise total control over their activity. Being forced to obey another player ruins it for them.

Nevertheless, rational people cannot deny that obeying the Code will help you avoid being ganked. If Kali had only followed the Code, she wouldn't have been autopiloting in a pod. Does anyone doubt this would've saved her implants?

It was precisely as you'd expect: Kali refused to accept the fact that EVE's multiplayer environment forces players to adapt to the actions of other players--even in highsec.

Another sign of progress: More and more gank recipients demonstrate a surprising level of familiarity with the provisions of the Code--even if they only understand them on a superficial level. Kali, a random autopiloter, already knew the story of how I came to rule highsec. 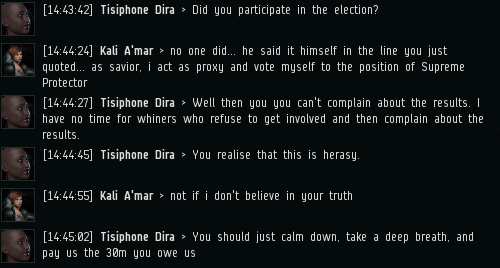 Tisiphone took some time to explain to Kali why my election was part of a perfectly democratic process. She didn't get it. But maybe she would pay anyway, out of self-preservation.

No deal. At least, not yet. On the bright side, Kali was totally calm. Perhaps Tisiphone could still reason with her.

To be continued...
Posted by MinerBumping at 19:31