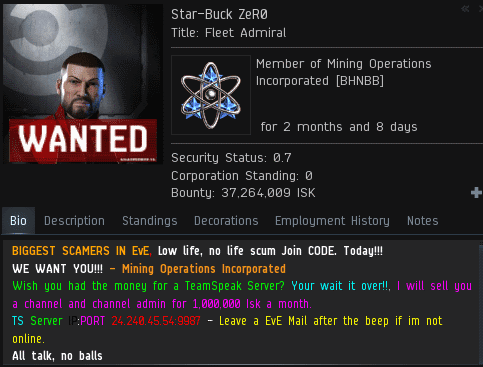 Meet Star-Buck ZeR0, an outspoken highsec carebear with a bad attitude about the Code. He was seen by many as a rising star in the Anti-Ganking community. He even had his very own channel and TeamSpeak server. But this promising young rebel's career was derailed by scandal.

Agent Alana Charen-Teng joined Star-Buck's channel in the hopes of bridging the gap between the New Order and Anti-Ganking communities. Star-Buck was infuriated.

In retaliation, Star-Buck threatened to destroy MinerBumping.com, the official home of the New Order of Highsec. To gain access to the site, all he needed was an exploit. Then MinerBumping would be hacked.

In fact, Star-Buck's plan had been in the works for quite some time. He was now extremely close to unlocking the next digit of the password. Once all of the digits were in Star-Buck's possession, the New Order would be done for. Alana was stunned. She joined Star-Buck's TeamSpeak server to try and dissuade him from his horrific plan.

It was a trap! Star-Buck used the opportunity to acquire Alana's IP address. Armed with this information, the rebel could take vengeance against Alana in a number of different ways. He could nuke her ports, making it impossible to access the internet and gank miners. Or he could turn off her computer's fan and melt the hard drive. With the right exploit, he might even be able to increase static in the USB array and deliver an electric shock into Alana's keyboard. For now, though, he simply banned Alana from his TeamSpeak server.

At the very moment of Star-Buck's triumph, his perfect plan fell to pieces. Anti-Ganking moderator Jennifer en Marland banned Star-Buck from the channel for out-of-game threats and "generally losing his shit". This raised the eyebrows of space lawyers everywhere. Did the banning of Star-Buck set a precedent? If losing one's shit is a bannable offense, it could be only a matter of time before all carebears lose access to the Anti-Ganking channel.
Posted by MinerBumping at 19:48