Previously, on MinerBumping... Illegal ice miner Iceman Alabel was ganked and subsequently put on trial for crimes against highsec. HotShotX Warcastle, a public defender, was appointed to represent him. It was the biggest challenge of his space legal career: The unruly miner confessed his guilt and spoke ill of the Code in open court.

Iceman's conduct threw the proceedings into chaos. TheInternet, an accomplished isk-doubler and part-time magistrate, strove mightily to maintain the integrity of the court.


TheInternet TweepsOnline TheInternet > THIS TRIBUNAL SENTENCES THE DEFENDENT TO BUY 500 MINING PERMITS, APOLOGIZE TO JAMES 315 PUBLICALLY, AND DO 30 LAPS AROUND HIGHSEC, A FORM OF PUNISHMENT FIRST PIONEERED BY JTClone Ares.
Fauntleroy Fappington > My!
Kalorned > A fair sentance if I ever saw one
Gaylord Fappington > Oh My Goodness!
HotShotX Warcastle > /emote jaw drops.
Iceman Alabel > ha thats a laugh
Iceman Alabel > ill do no such thing

The court handed down a severe sentence. Iceman would be forced to endure a brutal punishment, one invented by notorious rebel leader JTClone Ares as a draconian anti-awoxing measure.

So it seemed the Fappington family prevailed in court once again. HotShotX was in shock. Had he lost? Was his client doomed to run laps around highsec? He couldn't let that happen. Now there was no alternative but to go to Plan B: Shift the blame.

HotShotX threw out the possibility that another guilty party still threatened highsec. The suggestion was like catnip to the justice-craving judge, who launched a new investigation. This gave HotShotX the opening he was looking for. He quickly pulled new evidence from his private convo with his client:

It was another stunning revelation. Iceman's corp, The Blind Eyes, was a hive of bot-aspirancy. The miner's rebellion was being directed from on high!

The intrepid public defender pulled a rabbit out of his hat. By broadening the case to include Iceman's whole corp, HotShotX had effectively reset the trial to square one. Maybe.

Chocolate Mooses was one cool customer. Chocolate casually breezed into the courtroom with a calm that belied the day's earlier pandemonium.


HotShotX Warcastle > The defense submits that the guilt or innocence of my client cannot be determined without investigating The Blind Eyes and holding them accountable, if necessary.
TheInternet TweepsOnline TheInternet > I move that Chocolate Mooses lead the CODEdot side of the investigation so that we may adequately determine the depth of this rabbit hole we stumbled into today
Chocolate Mooses > I would be happy to help. I have taken a look at "The Blind Eyes" and from what the public records show, I have concerns.
TheInternet TweepsOnline TheInternet > /emote gasps

The court's new investigator wasted no time. Within seconds of being appointed, Chocolate had already uncovered shocking new evidence.

The crowd hung on Chocolate's every word. The noisy courtroom had been silenced. You could hear a pin drop.

Yet another incredible twist! 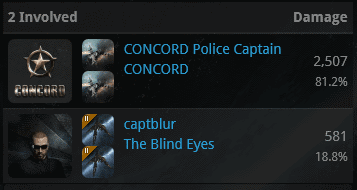 There it was: The Blind Eyes' CEO's brother was on a New Order Catalyst killmail in January. Granted, CONCORD's presence on the killmail meant that the rebel had failed to successfully interfere with the gank. But he intended to.

Just like that, the case had been blown wide open. Of course, HotShotX could barely celebrate before his feral client embarrassed him again.

A new chapter began. The New Order court, led by TheInternet, would stop at nothing to discover the truth, the whole truth, and nothing but the truth about The Blind Eyes corporation.