Part of Our World, Part 2

Previously, on MinerBumping... Salah ad-Din al-Jawahiri's study of whale behavior made him an even more powerful Agent than ever before. He swiftly destroyed about a billion isk worth of illegal mining equipment and implants from a single The Ancient GateKeepers Military Enforcement corp mining fleet. The surviving Covetor returned to keyboard and skedaddled.

The survivor's alt challenged Salah to find him, so Salah found him. Actually, the killmail timestamp indicates that Salah found him a minute before the challenge was made. It doesn't get any more elite than this, folks. 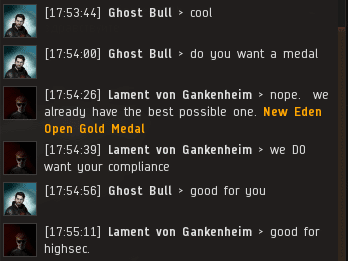 A clean sweep! The asteroid belt looked so much more beautiful without all the bot-aspirancy mucking it up. 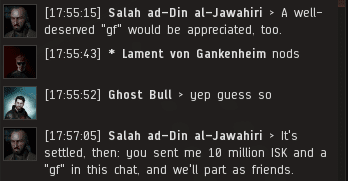 Salah displayed extraordinary PvP prowess. He'd eliminated all of the barges and exhumers. He'd popped their pods. The Ancient GateKeepers could deny the New Order's power no longer. Now it was time for the mining permit fees to start rolling in.

Despite Salah's victories, the peace negotiations dragged on and on. 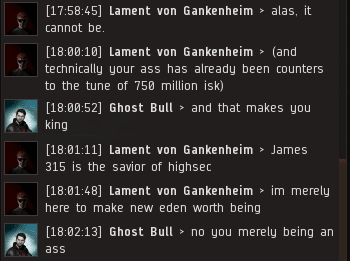 Highsec miner Ghost Bull wasn't impressed by people who can kill a mining ship. Ganking doesn't require skill, he felt. Why do highsec miners complain about other players not having skill? The same question goes for highsec PvE'ers who complain about gankers not taking risks. 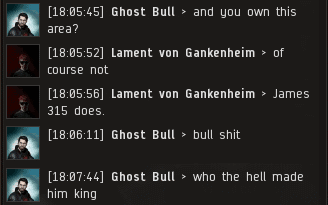 Ghost Bull was the latest to join the Rip Van Winkle club. Apparently he was asleep when the New Order took power. The good news is that a responsible voter had his proxy during the big election for supreme ruler of highsec. Ghost's vote was cast for me. 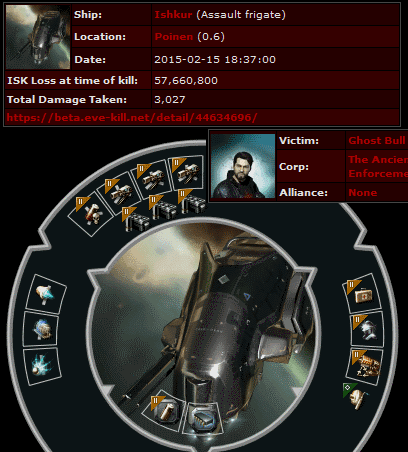 In desperate act of rebellion, Ghost Bull tried to interfere with Salah's ganking spree. But our Agents are no less capable when it comes to shooting ships that can shoot back. Salah easily destroyed Ghost's Ishkur. Peace returned to the Poinen system. 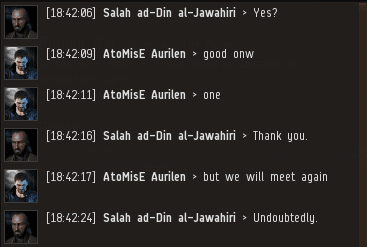 AtoMisE Aurilen was another of Ghost's alts. Salah's victory in their 1v1 was undeniable. It finally drove the carebear to give our Agent some credit.

After a brief racial inquiry, AtoMisE decided to play the victim. This is the usually the part of the story where we would look up AtoMisE's profile, discover that he'd been playing EVE a long time, and roll our eyes at his "I'm a new player" martyr routine. 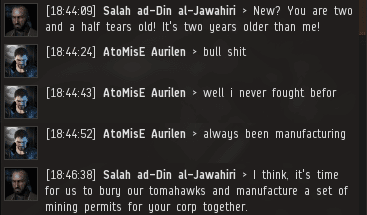 ...But Salah has us covered. What does a miner do when he gets called out on the "new player" nonsense? Now we know: He makes another excuse. As part of the New Order's latest public awareness campaign, I think I'll keep linking this post by CCP Rise until the situation improves.

Though his fleet's anti-asteroid firepower had been reduced, AtoMisE remained defiant as ever.

In spite of his rage, he was still just a carebear in a station. The New Order remains in power over all the highsec systems. The next time AtoMisE and his corpmates get an opportunity to speak to one of our Agents, hopefully the carebears will have something worth saying. Who knows? Maybe they'll even spice up the conversation with a payment of 10 million isk.
Posted by MinerBumping at 20:23