How to begin the 86th edition of the Highsec Miner Grab Bag? 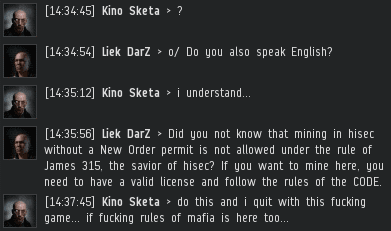 With another unlicensed carebear getting eighty-sixed, of course.

Wardecs are a good tool for making sure every carebear in a corp or alliance is held accountable to the Code.

...However, a carebear's responsibility to obey the Code is not contingent on membership in a corp or alliance. If you're in highsec, you're following the law of highsec, period.

The bot-aspirants, when they stop giving us the silent treatment, want so badly to express themselves. Yet their excited declarations often produce more questions than answers.

Andron Glavtorg wanted to present his freshly minted mining permit in his bio. Unfortunately, he didn't have room for it. This was a good opportunity for Andron to learn about the purpose of one's bio. Bios do not exist primarily for the purpose of listing NPC damage types or AU conversions. Nor is it necessarily a free-for-all where you can write whatever you want. A bio's main purpose is to glorify the New Order and its Code, and to proclaim loyalty and support for highsec's Saviour. Prioritize accordingly. 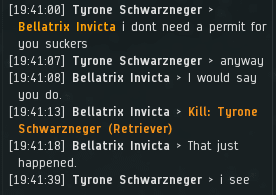 Like I always say, our Agents are natural-born educators. 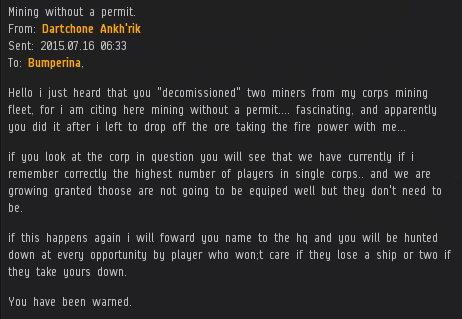 According to this miner, his corp (at the time he wrote the EVEMail) is the largest in EVE. In fact, he was in a very large corp--over 800 members. He thought that would impress our Agent, but it didn't. It simply meant that his corp owed the New Order a lot of money.

Try as they might, even the best space lawyer can't find a "coffee exception" in the Code.

After the caffeine high wore off, Spika Deva said he would be calmer in nullsec. I sincerely hope he's right. We've been sending a fair amount of angry miners to nullsec these days. 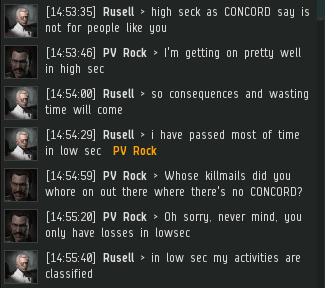 Highsec carebear Rusell started bragging about his lowsec adventures but had to stop himself when he remembered all his victories were confidential. Only his losses showed up on killboards. 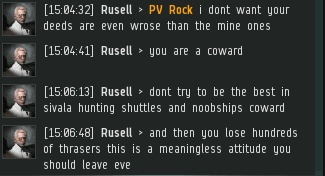 As you might recall, Rusell tried to inspire the Anti-Ganking community.

...but they remain as toxic as ever.

Tunnel Snake showed signs of progress when his note-taking was inadvertently sent to our Agent. Still, his note betrayed ambivalence about the Code. Let's close this edition of the Grab Bag with something more purely Gallant: 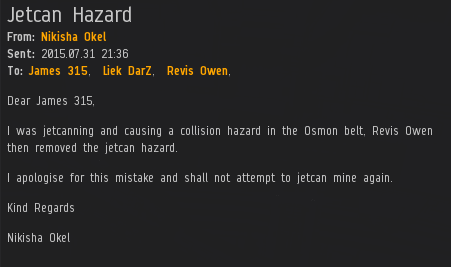 New permit owner Nikisha Okel took full responsibility for the actions that originally led to her encounter with our Agent. Impressive!
Posted by MinerBumping at 22:29