The Golden Age of Capt Lynch

For every empire, and for every life, there are ups and downs. Today's post is about the high point of Capt Lynch, the self-styled nemesis of the New Order. For Capt's EVE career, it doesn't get any better than this. 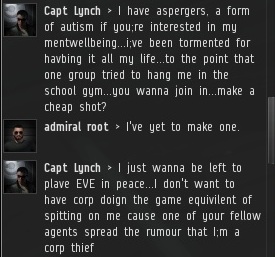 It was early November 2012, and Capt was ejected from his corp. Unable to secure employment, he had no choice but to seek help from the New Order. But he didn't want to pledge loyalty to us, so I eloquently explained why it was his best option:

...That was good enough. 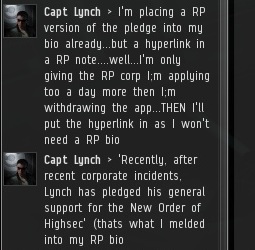 However, Capt was trying to get into a role-playing corp, so his pledge would need to be in-character. 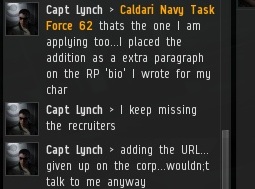 After several minutes, Capt gave up trying to get into the role-playing corp. The pledge was on! 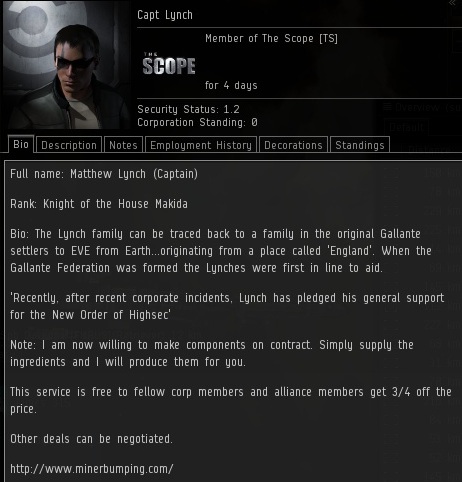 And so it was. Capt Lynch officially declared himself in favor of the New Order. For a brief, glimmering moment, it was a golden age. 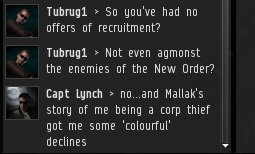 Capt had greater ambitions. He wanted to join a corporation. I advised him to become a bumper, but he wouldn't hear of it.

He abruptly ended the conversation.

Capt tried to end the conversation, at least. Capt confessed the untruth of the story about his brother. 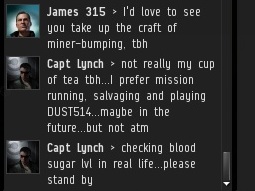 Once again, Capt brushed off my advice about becoming a bumper.

Agent Tubrug1 wanted to close the chapter on Capt's lie about the New Order making his brother cry. 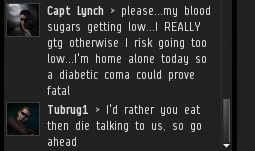 The clock was ticking, so we let Capt go. 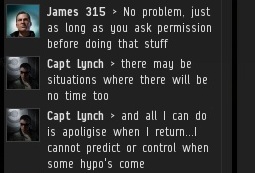 Out of mercy, I extended the bathroom rule to cover serious medical conditions. Miners may leave keyboard without docking up, if they get the permission of an Agent to go.

If you have no time to ask for permission, all you have to do is pay a small penalty. In spite of all this, I still occasionally have people yammering at me about the "Americans with Disabilities Act".

The Golden Age of Capt Lynch didn't last very long, however. The next day, he was back in a foul mood, as the logs of his private convo with Tubrug1 show:


Capt Lynch > may I talk for a minute? man to man without James getting involved?
Tubrug1 > Yep
Capt Lynch > did you know that James misled me on purpose when I paid the 100 mill to get the agents off ACE's back?

As I described on my blog, I had been exceedingly clear that when Capt paid me 100 million isk, it was to prevent me from attacking his corp. Capt read the blog and didn't much like it.


Capt Lynch > how can I trust that my pledge means jack shit when he pulls that
Capt Lynch > I paid my dues, made the pledge, apologised...and I still got a corp blacklist...I can;t even trust his word thats he;s called them off now...I mean he said he did last time yet here I am in scope exile

He apparently interpreted the 100 million as a fee to prevent all Agents from attacking him or his corp.

Tubrug1 was eager to hear words of wisdom.

Not a bad motto, actually. (Mining permits are another story, since they are always honored.)


Capt Lynch > as I said on a few blogs...despite anything I said...I do respect James...he came up with a legal high sec version of goonswarm that is technically un-wardeccable...anyone who can manage that knows his stuff
Capt Lynch > but I don;t think I will ever like him
Capt Lynch > too much bad blood over how he;s treated me during the last few weeks, if you understand

I'm not sure how the New Order equals "Goonswarm in Highsec", but I'll take compliments where I can.

Capt dropped the bomb: He was removing the pledge from his bio. The end of an era. Capt was already onto the next grudge:


Capt Lynch > and I read the other incident...labelling him a terrorist...really? as someone who's sister narrowly missed the london attack by a day...I find that offensive
Tubrug1 > What other incident is this?
Capt Lynch > http://www.minerbumping.com/2012/09/miner-expelled-from-corp-after.html
Tubrug1 > oh
Capt Lynch > when james calls his agents off,,,then I'll pledge...till then...nothing doing

Capt was angry that I referred to a miner as a "terrorist" in this post. In fact, I hadn't called him a terrorist at all--one of the anonymous commenters did. Capt's sister's near-miss with a terrorist attack (odds of that story being true, anyone?), combined with an anonymous comment, ruined all hope of good relations between Capt Lynch and the New Order. A tragic twist of fate.
Posted by MinerBumping at 23:41