Skeptics of the New Order question what we're all about. They have this idea that there must be some kind of ulterior motive at work. The answer is very simple: I am the Saviour of Highsec. As my title implies, mission is to save highsec. Nothing more, nothing less.

Sometimes entire corporations, alliances, or systems full of miners see the light and join our cause. I celebrate that. But my goal isn't to save 80% of highsec--otherwise my title would be Saviour of Part of Highsec. To save all of highsec, I must be equally willing to chase down and rescue individual sheep. Hence the Capt Lynch saga. (Part 1, Part 2, Part 3)

After I posted Part 1 of this series, Capt went ballistic.

I wasn't sure what Capt's objection was. He had never asked me to keep the conversation confidential, and he seemed to be familiar enough with MinerBumping to know that I occasionally post chat logs here. As the comment section of the post ballooned to more than 40 replies, Capt's additional comments provided illumination.


I consider being portrayed by James 'cherry-pick of that private conversation very offensive. Like I said...remove this blog or I will take action against you. This is your final warning, James

While I've been threatened in the past, I believe this was the first time anyone has ever demanded I remove a blog post. A relatively innocuous one, at that.


Just...please just leave me alone. I'm not even a miner. My brother isn't one either...I haven't done anything to deserve being tormented like this. Where does it say in your code that you should torment kids to tears?

Capt remained as sphinx-like as ever. What torment? And why did he claim he wasn't a miner when he had clearly mined ice in one of my systems?


Oh...and I concider the reposting of comments I made IN CONFIDENCE, IE PRIVATE a breach of my IP rights.

I'm assuming in this case "IP" stands for "intellectual property", though I don't think Capt's end of the conversation qualified as either property or intellectual. Things escalated when an anonymous commenter began encouraging Capt to sue me.

It seemed one of our space lawyer friends had evolved into a fully-fledged internet lawyer. Now the New Order was truly at risk--I had found myself under "lawyer jurisdiction"!


Crime? No. Slander? Open to negotiation. Anything is possible since the website is located on an American server. With current legislation as it is, stopping this website is not unfeasible.

Unimportant questions like how posting a chat log constitutes "slander" were brushed aside. But this wouldn't be the first time posting a log was described as slander. That honor goes to Eno Bray, a pioneer in internet lawyering.


Mr. Peterson would also be at risk as well should someone move forward in filing multiple complaints with ENOM in regards to his...choices. You can laugh if you please, but the law is the law, and if someone so chooses to bring it against Mr. Peterson and his venture here, it will happen.

I'm still not sure who Mr. Peterson is. It certainly can't be referring to me, since everyone knows my last name is 315.

Capt soon learned posting legal threats on blog post comments wasn't the panacea it first appeared. So it was time to go to the old standby: The in-game "Help" channel.


Capt Lynch > I want to report the illegal reposting of materials from a private chat
Capt Lynch > on a public forum against my wishes
Nacim Izcrius > Petition.
Capt Lynch > http://www.minerbumping.com/2012/10/the-curious-case-of-capt-lynch-part-1.html to anyone from the new order...warn james...if he fails t5o take this down...I will report him to blogger

...Because the Help channel was so helpful when he reported me for failing to protect one of my systems from a can-flipper.

When it comes to highsec, I am the authority. As a matter of policy, I keep things confidential when someone asks to go off the record. Otherwise, permission is deemed to have been given, enthusiastically.


Nacim Izcrius > Telling us isn't going to do anything, :P
Capt Lynch > oh...some of his moron agents like to come here alot
Cerishe > copyright law says a dude can own stuff you give him but that does not confer a right to re-publish
Cerishe > on the other hand its safe if the information is a common interest and you are both members of some group that info is re-distributed in
Cerishe > all provided re-publication is not commercial

Internet lawyering continues to be a popular sport, but I prefer the bumping of miners. In any event, the 24-hour deadline elapsed, and no doomsday occurred. 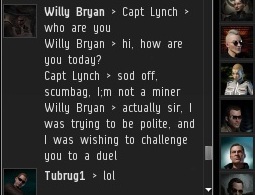 Agent Willy Bryan felt Capt's unsubstantiated allegations about Agent impropriety should not go unanswered. He challenged Capt to a duel. 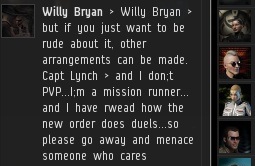 Capt declined, preferring to spend his time on highsec missions. 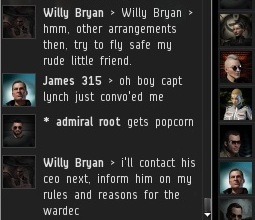 Perhaps things would have ended there, but Capt wished to open communications once more.

Capt's manners hadn't improved. This silliness had gone on long enough, I felt. It was time to resolve the Capt Lynch situation once and for all.

To be continued...
Posted by MinerBumping at 01:54