A Song of Ice and Liar

It won't be long before "Retribution", the winter expansion, changes the bounty system and clears away old bounties. You may recall a story from last month, when Agent Tubrug1 found himself with a 600 million isk bounty on his head--perhaps the largest "genuine" bounty ever placed on someone through the broken bounty system.

Tubrug1 used an alt to collect it the next day. Richer from the experience, Tubrug1 was nevertheless left with a most puzzling mystery: Who put the bounty on him? It was time to haul in the usual suspects.

Capt Lynch is a man who needs no introduction. Though others would gladly vie for the title, Capt is perhaps the most well-known opponent of the New Order. What that says about the resistance, I leave for the reader to judge. 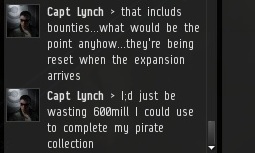 Agent Tubrug1 and I interrogated Capt in a private channel. He protested his innocence, and sounded credible enough. 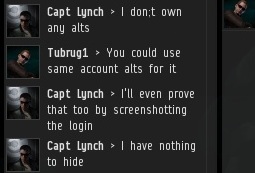 Tubrug1 played "bad cop", pressuring Capt to confess. Smooth as you please, Capt said he would be happy to provide screenshots of his wallet. He would also show us his login screen, to prove he had no alts. 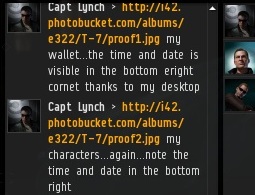 Capt sent us the screenshots. He was a cool customer, and we couldn't hold him in a private convo indefinitely. If there was nothing incriminating in the screenshots, we would have to let him walk. 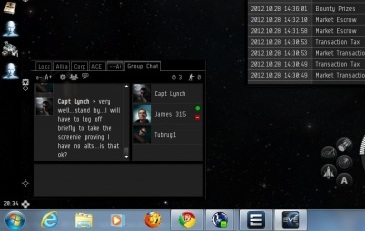 Tubrug1 hit paydirt: In the corner of the screenshot, he noticed that Capt had me watchlisted and set to negative standings!

Capt's calm demeanor cracked for the first time. He was taken completely by surprise. 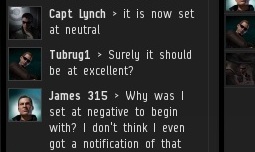 Capt backpedaled furiously, but it was too late. Tubrug1 was on the scent. 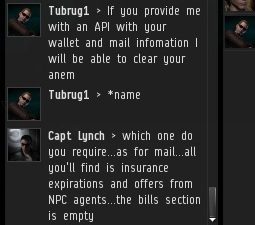 Like a dog with a bone, Tubrug1 wouldn't let go. He would make space detective for this!

Following Tubrug1's instructions, Capt created a new API so that we could have a look at his financial transactions. In addition, Tubrug1 requested that the API allow us to read Capt's EVEmails. Capt insisted there was nothing to be found in his EVEmails, but he enabled that option anyway. 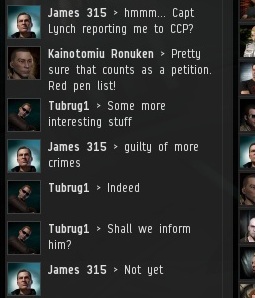 As Capt waited nervously for a verdict, Agents of the New Order began sifting through all the new intel. The first thing that jumped out at us was Capt's EVEmail to CCP karkur, one of EVE's programmers:


I apologise for this but I have tried everything else. I want to report how a loophole is beign turned into an exploit and a cheat in eve. You almost certainly know of the dodge to avoid wardecs by closing a corp...however, one person is using this dodge to avoid EVERY wardec as well as use it to intimidate players with his so-called 'invincibility'.

The players name is James 315 and according to his blog, he doesn;t even TRY to hide the fact that he uses this exploit. He runs a single man corp and ALWAYS closes it when he gets wardecced by angry players opposing his so-called New Order (info here www.minerbumping.com )

While I do understand that EVE is a sandbox, I can also spot an exploit being taken advantage of when I see it. I am not asking you to ban this character...but please...I beg you, PLEASE do something about the unfair exploit he is using to protect himself from the consequences of his actions.

Please reply to this.

Though CCP usually do not reply to EVEmails, CCP karkur did--but that's a story for another day. A review of Capt's financial info cleared him of the whole bounty business. The EVEmails showed he was guilty of other crimes. A victory for the New Order Intelligence Agency (NOIA), the most powerful intelligence agency in highsec! Tubrug1 told Capt he would get back to him.

Capt neglected to delete the API, so the New Order continued to have access to his EVEmails. It was time to blow the lid off this whole "resistance" thing.

To be continued...
Posted by MinerBumping at 01:16