Miners across Gallente highsec have been forced to flee, repeatedly, in the face of the New Order's advance from Brapelille to Chelien and onward. As expected, the miners bottled up in Deninard. A popular ice mining system in its own right, Deninard became swollen with refugees. Just prior to New Order raids last week, Deninard hosted more than 100 mining barges and exhumers in a single ice field--breaking the record set by Chelien a few weeks ago.

This is unprecedented. Past efforts have targeted all of highsec (Hulkageddon) or part of it (Gallente Ice Interdiction). But never before in EVE's history have highsec miners been progressively herded in this manner. No wonder they call me a shepherd!

As a result, Deninard has become the nervous system of the resistance. By "nervous system" I don't mean to compare it to the human nervous system; I just mean it's a system full of nervous people. Deninard's miners spend their days debating and fretting about how to deal with the New Order. Many of them are exhausted from being forced to evacuate their home systems over and over.

Victor Bastion, the CEO of Bastion Mining and Armaments, proposed a solution. One look at his corp's description tells you whether or not his proposal will be a good one. 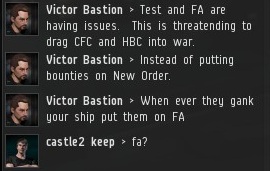 The CFC (led by Goons) and the HBC (led by TEST and Pandemic Legion), are the two most powerful coalitions in EVE. Together, they control nearly all of nullsec. According to Victor, the way to handle the New Order is to put bounties on one of the CFC's member alliances. Huh? 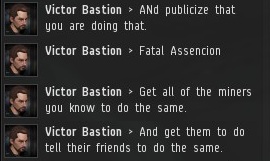 Fatal Ascension, the alliance in question, is disliked by some among TEST's leadership. Nullsec is buzzing about the possibility of a TEST/FA conflict sparking a war between CFC and HBC.

Local miner castle2 keep was eager to help, but not finding the dots very easy to connect. He posed an important question: What did any of this have to do with the New Order or its Code? Victor hoped the miners of Deninard could use the bounty system to help incite the greatest war nullsec has ever seen. So much for "peaceful" miners!

As conspiracy theories about the New Order spread from one system to the next, they evolve. The conventional wisdom now says that in order to hurt the New Order, the miners should do their part to destroy the great powers of nullsec. It's the only way they'll be able to mine AFK in peace. 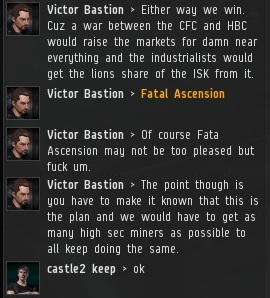 Victor encouraged everyone to pass it on. Could this be the end of the New Order?

Other rebels in Deninard liked the plan. It appealed to their instincts of spending isk on anything but the mining permits that the Code tells them they're supposed to spend it on. 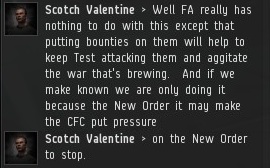 Yes, somehow this convoluted plot makes more sense than sending 10 million isk to an Agent of the New Order and putting a pledge of loyalty in one's bio.

"Honor. Courage. Loyalty. Integrity." Have the miners of highsec lost faith in their own clichés?
Posted by MinerBumping at 01:57