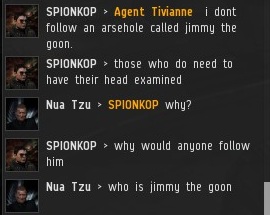 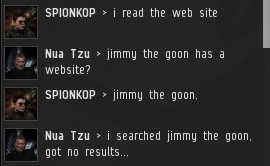 No, I don't have an alt in the mafia. Only SPIONKOP calls me that. 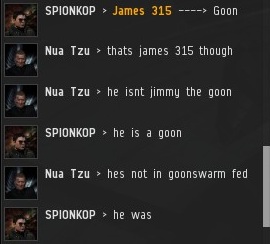 I wrote earlier of the rumors about dark plots circulating around Kamio. 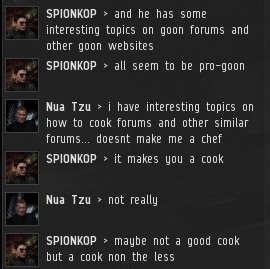 SPIONKOP and others have taken hold of the fact that years ago, I was among the Goons. This is a slight improvement over the days when people thought I was a new player who had purchased James 315, or didn't believe that I had ever been in nullsec before. 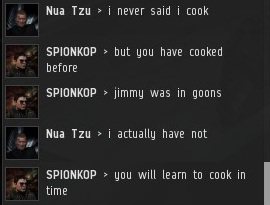 SPIONKOP tortured a cooking metaphor to death as he tried to explain his theory about the New Order and its sinister plans for highsec. 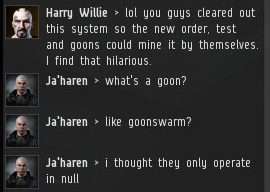 I think my favorite aspect of the conspiracy theory is that it revolves around Goons, TEST, and the New Order gaining total control of Kamio ice. As if you can't get the exact same ice from some other ice field.

Rebel whiner Harry Willie imagined a Goon or TEST alt lurking beneath every chunk of ice in Kamio. He's figured out the first two parts of our plan: To drive everyone else out of Kamio, and to get the Kamio ice all to ourselves. Part three? Not clear just yet. But he's got screencaps of an empty highsec ice field, so it won't be long before he puts all the pieces together. 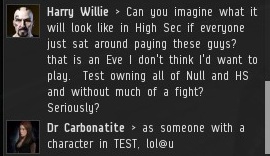 No one has anything to fear from a future in which everyone in highsec is loyal to the New Order. An annual payment of 10 million isk does not constitute everyone "just sitting around paying these guys". 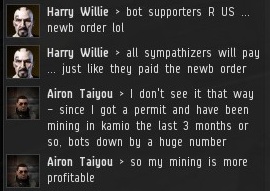 Quisling = backdoor Nazi reference--nice try, Jean Pelletier. Battle lines have been drawn among the mining community, between those who see the Code as beneficial and economically rational, and those who fear that Kamio's ice field is the first step toward galactic domination by the Goons/TEST/Order Axis. If you're a miner, which side do you choose?
Posted by MinerBumping at 18:52