Protocols of the Elders of Goonswarm

The New Order has taken highsec by storm. Fearing suicide ganks for the first time in several months, miners are beginning to talk to each other. This exchange of ideas isn't always productive.

Perennial curmudgeon SPIONKOP began to suspect CCP involvement in the New Order. What else, he asked, could explain so many petitions being denied?

For the record, I welcome all EVE-playing CCP employees to join the New Order and have some fun bumping and ganking miners. CCP employees are no longer allowed to play vital roles in nullsec alliances, but there will always be a place for them in the highsec utopia I'm building.

As our Knights barreled across Caldari highsec in December, a new theory took root: I am the alt of none other than The Mittani himself.

Among the carebear population, there are still grudges and misconceptions concerning The Mittani. They hate him, and they hate me, so why not save time and combine the two? 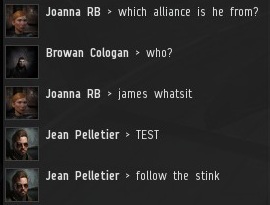 There are competing theories. TEST is frequently cited as the driving force behind the New Order. 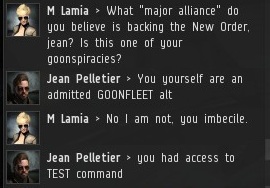 Then again, many highsec miners think Goons and TEST are one and the same. In that case, it's not such a stretch to add other entities to the mix: Goons, TEST, and the New Order are all run by a shadowy cabal bent on highsec's destruction.

The motive? Control of EVE's economy. Such a grand conspiracy could aim no lower than total galactic domination. 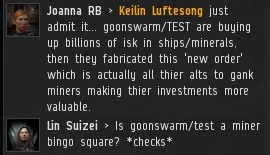 Market manipulation is the key. But if we're trying to drive up prices, why the 10 million isk mining license? And why, for that matter, the existence of the Code? Conspiracy theorists are confident that they'll eventually connect all the dots. 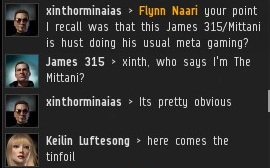 With all the self-assurance of a space lawyer, xinthorminaias says he knows I am The Mittani. 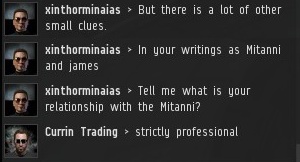 It's a passing of the torch, of sorts. The Gallente Ice Interdiction, Burn Jita, and Hulkageddon Infinity terrorized the highsec miners. Just when things were returning to normal, the New Order shows up. The carebears think it must be the usual suspects back to their old tricks.

I'm pretty sure The Mittani isn't taking 3 a.m. phone calls unless he becomes President of the United States.

Some years ago, there was another group of bad people. They called themselves the Band of Brothers alliance, and they, too, spread the rumor that I was The Mittani's alt. Whether this is a resurrection of that, or whether conspiratorial lightning struck twice in the same place, I cannot say. But neither BoB nor the carebears of highsec have produced a shred of proof to back up their claims. Incidentally, BoB was defeated by the good guys. The Code violators are following in their footsteps. 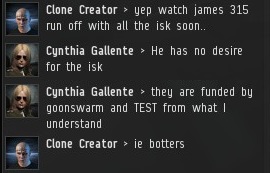 When we relocated from Caldari highsec to Gallente highsec, the rumor mill was already at work there, cranking out the stories of fiendish plots and dark forces behind our noble effort. 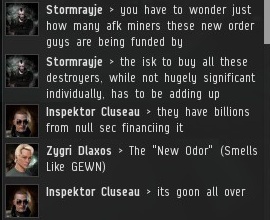 Why the conspiracy theories, and why Goons/TEST? It's simple. The New Order has demonstrated it holds the power of life and death over the miners of highsec. The carebears might not like us, but they respect what we can do. For the New Order to appear so suddenly from nowhere and hold such power, some other omnipotent force must be behind it. In the EVE galaxy, it doesn't get any bigger than Goons and TEST. That's the only reference point these miners have.

Ironically, the New Order is the most transparent organization in EVE. We hide nothing from the public--even the names of every single shareholder are made public. On the other hand, some say that the New Order doesn't really exist and that the Agents are all my alts. I wonder, why do the highsec miners believe in everything except the obvious reality?
Posted by MinerBumping at 03:00