Previously, on MinerBumping... We took a trip into the rebels' Anti-Ganking channel, a very strange land. A place aptly described by haiku specialist Maria Malukker:

In the Twilight zone:
Antigankers are heroes
and miners are brave

Every so often, a debate breaks out in Anti-Ganking. Ajax Xulthark and Veers Belvar argued about whether there is a silver lining to the New Order's gank operations. Ajax could see the folly in anti-tanked freighters who carry around BPOs.

Veers asserted that it's illegitimate gameplay to deliberately suicide gank a ship when there's no possibility of financial gain. This, he believed, was little different than trolling someone during a Bonus Round.

Ajax agreed that Bonus Rounds are bad. However, he pointed out that players in Anti-Ganking sometimes violate the EULA by using death threats and such. Not all rebels could accept the moral equivalence argument. l3urton, for instance, saw a clear distinction: CODE is bad and anti-CODE is good. Inherently.

This led to a broader discussion about whether gank victims can be expected to behave themselves. Considering their passions, perhaps they should be given a temporary get-out-of-ban free card. Kind of like an aggression timer in reverse, to excuse them of their EULA violations.

In EVE, unlike other video games, combat can result in losing valuable equipment. It's not something a player can be prepared for, argued the rebels.

Only after many years of suffering can a player be expected to learn not to fly blingy fail-fit ships. (This raises the question of who's supposed to provide the suffering, but never mind.) Naturally, it was assumed that "new players" were flying the anti-tanked freighters with BPOs.

Condemnation of the New Order's infamous "Venture-Killing Contest" ensued. But even here, Ajax was able to see the other side of things. 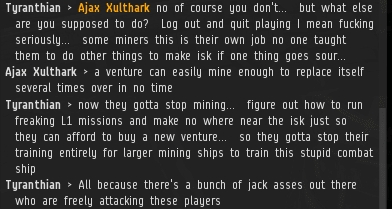 Despite Ajax's points, the rebels held fast to the belief that "new players" should be allowed to advance in their mining careers without the troublesome interference of PvP.

Dazzler Muvila broke into the conversation and won applause: The New Order has arguments on its side and can make some good points, true. But making arguments is only another sign of how evil the New Order really is! The rebellious l3urton had heard enough. He was tired of listening to people complain about the New Order. He would take action. 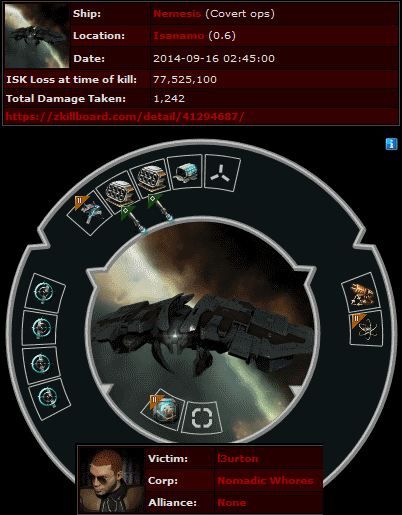 Action came in the form of a fail-fit ECM stealth bomber. He was unable to stop any ganks, though. Instead, he got ganked himself, by Agent loyalanon. 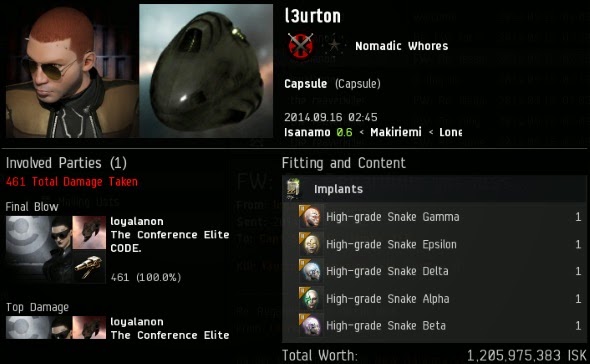 l3urton also lost his snake-filled pod when loyalanon's Thrasher fired a second volley. l3urton was sent a form EVEmail reminding him to purchase a mining permit as soon as possible.

The Anti-Ganker channel proved to be a bad influence on the impressionable young rebel. (He's been playing EVE for over 6 years. That's a "new player", right?) l3urton filed a petition against loyalanon for "repeated harassment".

Disavowing their own part in radicalizing the anti-ganker, rebels shook their heads. Another defeat for the rebellion. You know, there's a lot of nonsense going on in that channel. Yet I can't help but feel that eventually, somehow, a few of those anti-ganker fellows might learn something from it.
Posted by MinerBumping at 17:46