If the title confuses you: No, not that kind of "apology". The other kind.

Agent Sophaya Fortelleren is one of the foremost philosophers of the Code in highsec. (The number of highly-trained Code scholars is growing daily!) You might recall Sophaya's The Book of 315 from earlier this year.

After very careful consideration and close study, Sophaya has concluded that the Code is definitely the way to go in highsec. Yet there are still those who criticize the Code and its followers.

Time to put an end to that nonsense. 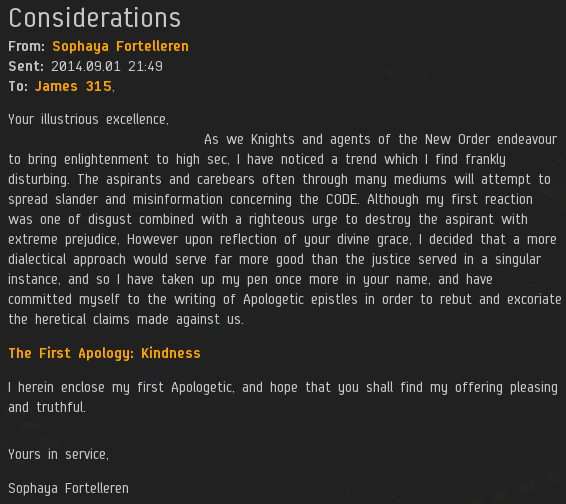 Sophaya presents The First Apology: Kindness, a discourse on the nature of the Code enforcers. Are Agents of the New Order sociopaths, as has been claimed? Sophaya puts the myth to the test.

Dealing with a brainwashed bot-aspirant? This is another tool in your kit, Agents.

BONUS UPDATE: A SoundCloud version of The First Apology: Kindness, voiced by Sasha Nyemtsov.
Posted by MinerBumping at 18:12

Email ThisBlogThis!Share to TwitterShare to FacebookShare to Pinterest
Labels: Agents, Philosophy, The Code