Ganks of Future Past, Part 1

If you're going to mine without a permit, you might as well do it in Hek. That way you get ganked sooner--and then you're that much closer to buying a permit. 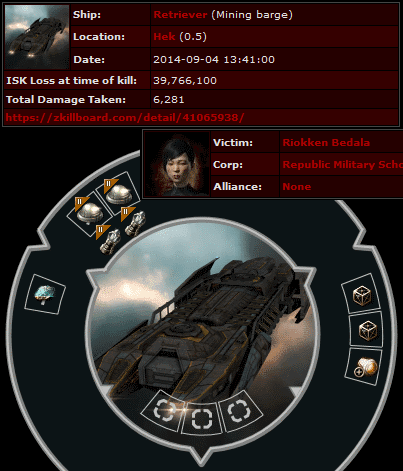 Illegal miner Riokken Bedala was scrounging around in the asteroid belts of Hek, gathering ore that didn't belong to her. Her 40 million isk speed-fit Retriever was no match for the Catalysts flown by local Code enforcers.

Now that Riokken was the recipient of emergent content, her eyes were opened to the true EVE experience. Instead of stumbling around, wondering what to do next, she could learn about the game from a highsec authority figure. 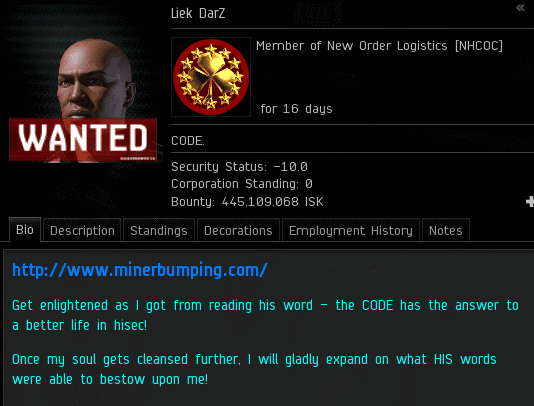 Riokken's content provider that day was Liek DarZ. This is one of the things that's really great about the New Order: Liek is an extraordinarily powerful Agent, yet he's so down-to-earth and approachable. He acts like a normal person; despite being a highsec celebrity, he doesn't let the fame go to his head. All our other Agents are the same way.

The rapport-building phase began. Riokken was too suspicious of the Order to buy a permit. Liek made a good point about judging the New Order by its actions. He won the argument instantly.

Trust is essential in any relationship. Riokken didn't trust Liek not to gank her again. Liek, on the other hand, was willing to take the first step: He would trust Riokken enough to accept her 10 million isk.

So far, things weren't looking good for Riokken. She was preoccupied with her own personal safety, rather than focused on achieving the mission: improving highsec.

However, Riokken was willing to make a deal. To make up for the loss of her 40 million (30 million?) isk Retriever, she wanted to pay 5 million for a permit instead of 10 million. It was bizarre. She thought an Agent of the New Order would compromise the Code for the sake of a paltry 5 million isk per year.

Now we get to the heart of the matter: Riokken was one of those "I would have paid if you asked" people. You can't trust anyone who uses a variation of the "I would have X, but..." line. How can you test such a claim? Time travel?

For someone who simply repeated "5 million" over and over, Riokken was very critical of Liek's negotiating skills.

The miner got nowhere with her strategy of repeatedly offering 5 million isk, so she pulled the ripcord on the convo. She vowed never to buy a permit. 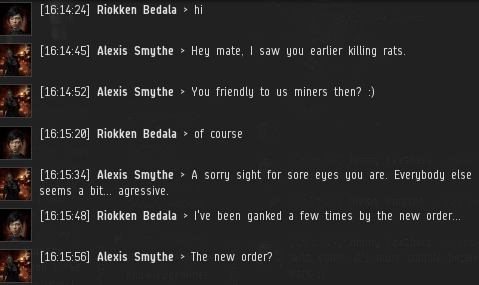 The next day, Riokken was back in the Hek asteroid belts. She encountered Alexis Smythe, a fellow miner. Alexis was so innocent-looking. Appearances can be deceiving. For Alexis Smythe was actually the scout alt of Tisiphone Dira, an Agent of the New Order.