Have you ever wondered what gives the New Order the right to decide what's good for highsec? After losing a 4.3 billion isk freighter, Laura Belle sure did: 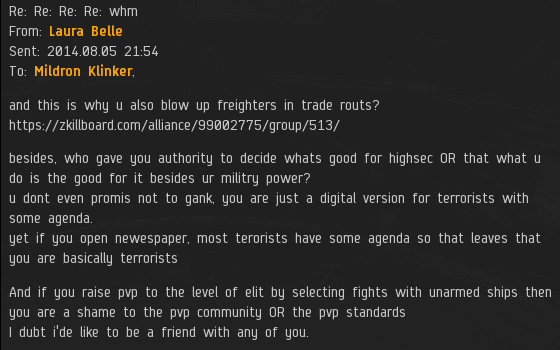 The answer is surprisingly simple: The Code gives us the right. Laura must've felt awfully silly once she realized that. Carebears of highsec, educate yourselves. Otherwise you might end up on the next edition of the Highsec Miner Grab Bag!

Anatta Buddhas wrote a confusing EVEmail with the subject heading, "INTELLIGENCE is not be bought". Apparently it wasn't. 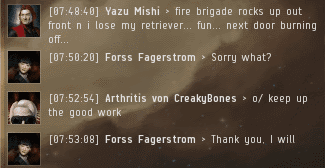 Kudos to Yazu Mishi for inventing a brand-new reason for going AFK in his Retriever: He was participating in a fire brigade to save his neighbor's house. Carebears get more ridiculous every day. Ladies and gentlemen, we are this close to a literal "I was saving orphans from a burning building" excuse! 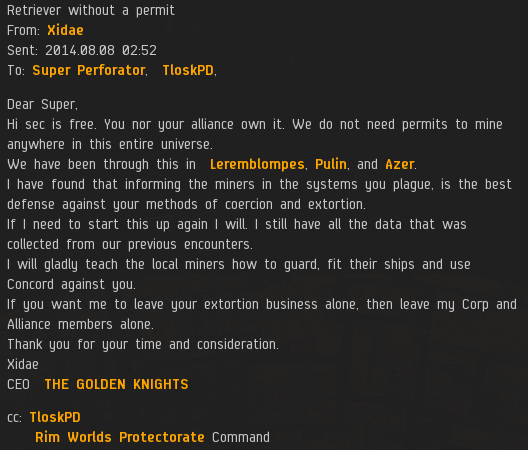 Protip: If you've already been kicked out of three different systems for breaking the rules, highsec probably isn't free, and you probably do need a permit to mine. 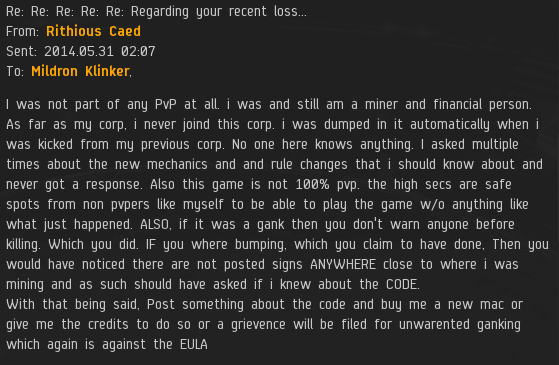 Rithious Caed complained that "unwarranted ganking" was against the EULA. In case he hasn't noticed, the New Order has gone to greater lengths than any other organization in EVE to explain, document, and justify its actions. If Rithious truly believes enforcing the Code is "unwarranted", then he's right about one thing: No one in his corp knows anything.

Carebears love to excuse their own bad behavior by pointing to someone else's bad behavior. Botting is against the Code, yes. So are a great many other things. If you habitually violate one provision of the Code, don't consider yourself better than someone who violates another. 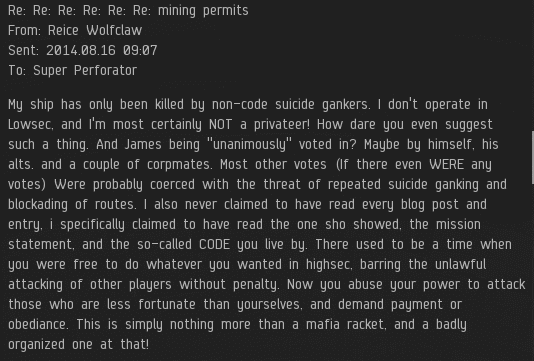 Reice Wolfclaw longs for the good ol' days, before the Code, "a time when you were free to do whatever you wanted in highsec". Yeah, I remember those days. It was a frickin' nightmare.

Agent Super Perforator asked Reice why he was so upset about living under New Order rule. Reice answered:

In other words, he was upset for no good reason. Maybe it had to do with something out-of-game. Perhaps his house burned down because the members of the local fire brigade were all at home in front of their keyboards like they're supposed to be.

Every carebear has his own opinions about what is and is not appropriate behavior. For example, Baarrff feels it's acceptable to use racial slurs--as long as they're deployed in the proper context.

Another situation in which Baarrff feels comfortable with racial slurs: When there's no other word to describe what you're talking about. Here we see the dangerous consequences of a carebear's limited vocabulary.

The truth is, when every carebear is allowed to behave according to what's right in his own eyes, highsec is doomed to chaos. It's impossible to build a civilized society upon the foundation of a million different moral standards and philosophies. Everyone must be made to follow one standard. Fortunately, there is a singular standard by which everyone in highsec is judged. It starts with a "C" and ends with "ODE always wins".
Posted by MinerBumping at 18:40