If you can hear DrysonBennington whimpering, you know it's time for another Kills of the Week post. To be clear, the New Order isn't all about killing people. Ours is a mission of peace. Even so, a great civilization cannot be built overnight, and a lasting peace cannot be established without using force. This kind of killing--to be distinguished from that which occurs during an indiscriminate massacre--is a necessary part of the highsec peace process. Let's check out some fun kills that took place during the peace process from the week of August 31st @ 00:00 EVEtime through September 6th @ 23:59 EVEtime.

Watch out! EVEEYE.com issued a suicide gank warning for the Uedama system. Did the carebears pay attention? 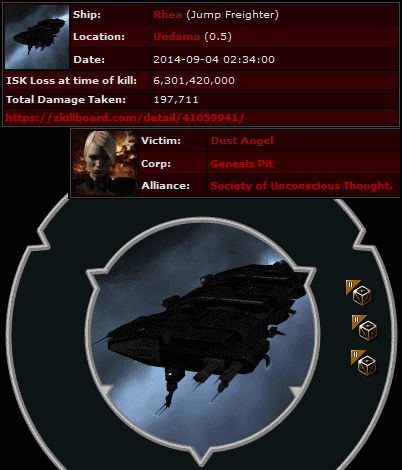 Dust Angel's nano-Rhea was turned to dust when it failed to outrun a force of 30 New Order gankers. Many alliances took part--even our powerful nullsec friends Pandemic Legion sent a representative. Note to future jump freighter owners: A triple-nano fit is no substitute for a mining permit. 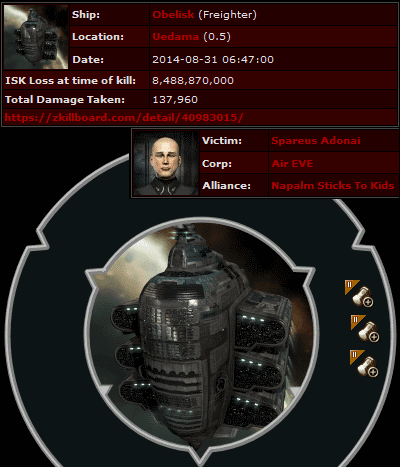 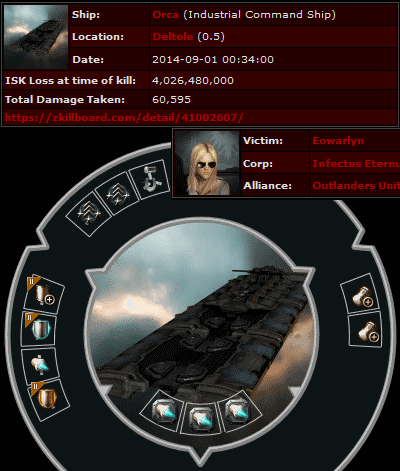 What is it with Orca pilots today? Eowarlyn lost a 4 billion isk Orca when she took an unscheduled jaunt through my territory. Her Orca was quintuple-anti-tanked and filled with a bunch of junk that she probably should've left at home. The rebel community response: 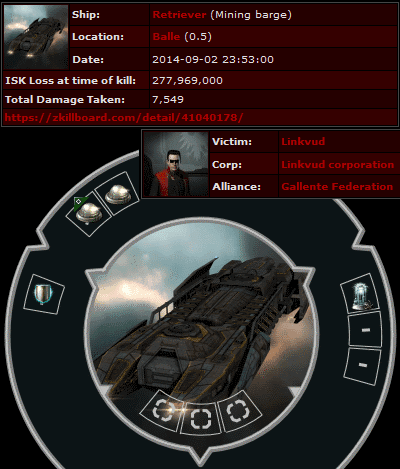 Enough of these multi-billion isk kills. Let's get back to our roots. Linkvud appalled the good people of highsec with one of the worst-fit Retrievers I've seen. What, he couldn't fit a damage control in one of the two extra lowslots? Thankfully, Agent King of Highsec sent Linkvud scurrying back to the drawing board. 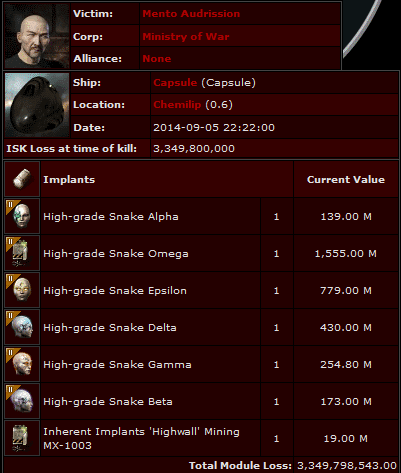 I guess we're back to the multi-billion isk kills, thanks to Mento Audrission. This snake in the grass hid himself among fellow Retriever pilots in a random system. Though he equipped more than 3 billion isk worth of snake implants, he couldn't slither away from Agent Jack Van Impe quickly enough to escape death. I don't know why a highsec miner would buy so many speed implants. Maybe he thought they would speed up his mining. Jack wisely submitted this kill to Agent DJentropy Ovaert for the September pod-killing contest. It might be tough to beat, but we've all learned never to underestimate the bot-aspirancy of the highsec carebear.
Posted by MinerBumping at 21:47