Brace yourselves. Today you're going to get a glimpse of another world, another realm. One in which black is white, right is wrong, and up is down. I'm speaking, of course...

...of the Anti-Ganking channel. It is a troubling place. From within this channel, the perspective of EVE is so twisted as to make the game almost unrecognizable. If you dare to step through the portal, your only consolation is the company of fellow New Order spies. 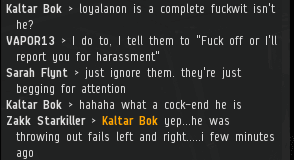 At first, the carebears of Anti-Ganking feel familiar. They're spouting hate and nonsense about the New Order, just as any bot-aspirant would after being ganked. 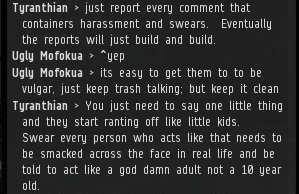 But when the rebels gather into groups, their misguided beliefs echo off of each other, creating a most bizarre culture. For instance, according to the Anti-Ganking view, Agents of the New Order are vulgar in local, and the carebears are polite and respectful. 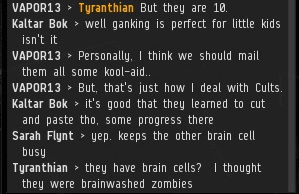 In addition, AFK miners and carebears who do the same mission over and over are seen as thoughtful, creative individuals. The New Order Agents are "brainwashed zombies". The whole world is inside out! The rebellion is continually strangled by paranoia. They see spies everywhere. At the slightest provocation, they will accuse each other of being New Order Agents. Protip: Carebears, our spies are the ones you don't suspect. You're better off kicking people at random than trying to do counter-intel. 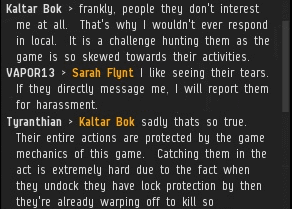 Just when you think you're getting a handle on things, the twisted environment knocks you for another loop. Miners claim to enjoy ganker tears. And they believe the game mechanics are heavily stacked in favor of risk in highsec. They probably think CCP has been buffing suicide ganking all these years! Anti-Ganking can be a depressing place. It's not easy to be around people who lose every battle, day after day.

Later, the rebels discussed news of New Order Agents being permabanned by CCP. If I were banned, would it make a difference? Rebels disagree. 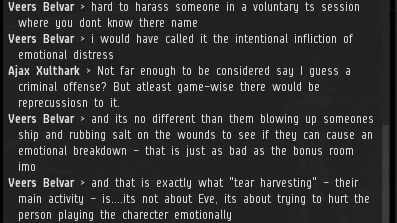 MinerBumping comment troll Veers Belvar strongly believes the entire New Order should be banned. In his opinion, we don't actually play EVE; we merely "harvest tears". Why would we go to the trouble of harvesting something that falls from the sky freely in buckets every day? That's like saying people go to Jita to harvest contract links from spammers.

Some rebels suggest the existence of the New Order gives them something to fight instead of red crosses. But in the view of the extremists, fighting back only legitimizes us. Apparently a lot of carebears agree, because hardly anyone fights back.

A strange place, indeed. If a carebear stays there long enough, he loses his connection to reality. A rebel can become so far gone that he thinks all the rational people have lost their connection to reality! Is there any escape? Can the New Order still save a bot-aspirant who gets caught up in a place such as this?