Carebears love their untanked, max-yield mining fits. Since the New Order began ganking them, bot-aspirants have struggled to find something that works. The answer is staring them right in the face: A mining permit! The most stubborn of the carebears are still experimenting with strange and unnatural configurations for their mining ships. 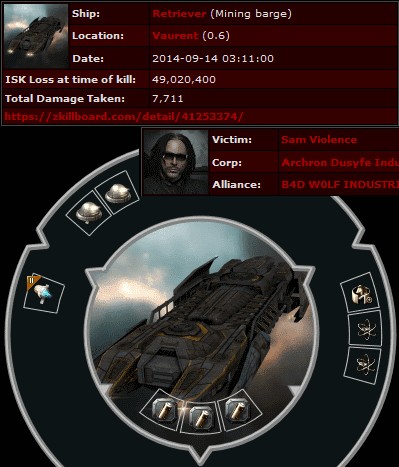 Take, for example, Sam Violence's power-armor fit. Iron Man he ain't. Sam went up in a plume of smoke during his fight with Agent Guybertini. 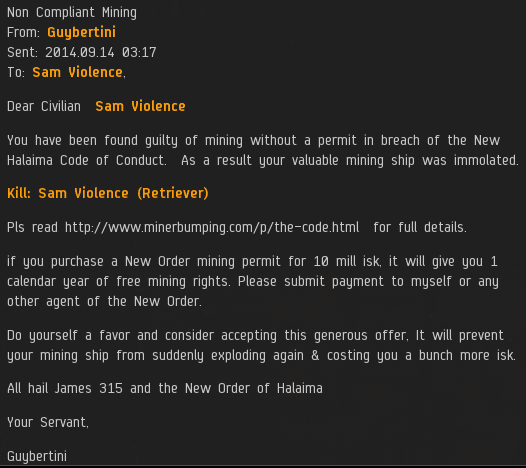 Guybertini won the war, so now it was time to win the peace. To prevent Sam from returning to his evil ways, our Agent threw him a lifeline and offered to help modernize Sam's mining operations. If Sam had a source of legitimate income, he wouldn't be as tempted to engage in illegal activity. Now that's a forward-thinking approach!

Alas, the miner still had sentimental attachments to his old way of life. 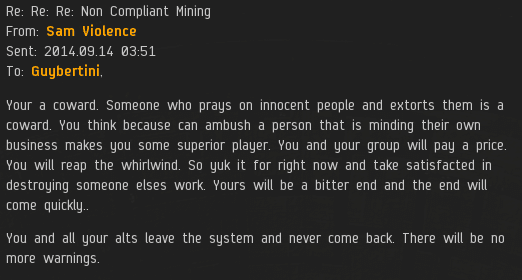 Sam was just another random highsec miner. You know what that means: Promises of extraordinary revenge to be visited upon the New Order. The end would come Quickly™. (It's like Soon™, but much later.) Guybertini couldn't help but express his skepticism. So Sam sent another EVEmail:

At last, Sam contributed something unique to the EVE community. There aren't many carebears who come with their own catchphrase. Sam promised that I would receive "a thousandfold" destruction. If I'm credited with all the kills made in the name of the Code, does that mean I'm going to lose quadrillions of isk? My wallet would go so negative. 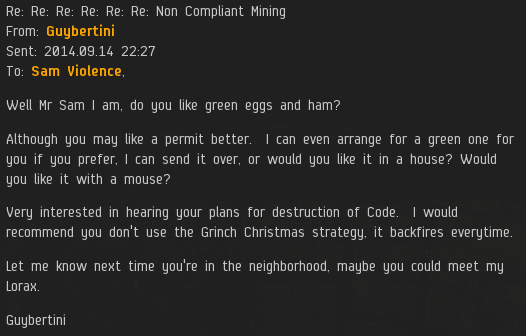 Guybertini hoped to reach an accommodation with Sam by taking an interest in the things Sam was interested in.

Sam wasn't prepared to buy a permit yet. No problem. Because when all is said and done, we are the New Order and we will be here.
Posted by MinerBumping at 18:04