New Order Agents are the most ambitious players in EVE. They aren't interested in accumulating a bunch of isk while AFK; they intend to make their mark on the game. And they're succeeding beyond anyone's wildest expectations. 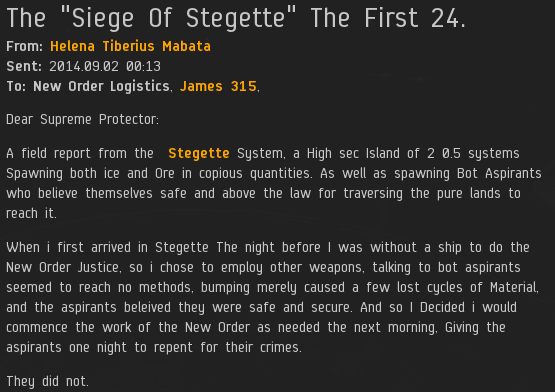 Agent Helena Tiberius Mabata chose to carve out a slice of highsec in one of the "islands", areas surrounded by lowsec. One might expect the miners there to be a bit less bot-aspirant, since they have jumped out of highsec at least one time in their careers. However, in many cases the miners arrive in the islands by accident. Sometimes they're trapped. In any event, highsec miners in the islands are usually ill-tempered.

The first miner to die was totally ignorant of the joyous reforms being enacted elsewhere in highsec. Helena shared the good news.

The miner was very confused. Helena had no choice but to educate him. How can you explain the New Order of Highsec to someone who doesn't understand what highsec is?

Anti-Order memes are like pollution. No matter how remote the location, you can always find traces of the filth. Doger accused an Agent of "black mall". Outrageous.

If you've ever doubted whether the New Order can leave a lasting impression on EVE, consider this: Years after the Gallente ice interdiction and Hulkageddon Infinity, miners are still complaining about the Goons. The New Order shall last forever, but even if it didn't, the miners would talk about it forever.

Without prompting, Doger revealed his mixed-up priorities. He was doing calculus homework instead of mining at his keyboard. Parents, please tell your children that they can enjoy some homework after they've finished their video games.

Helena returned to Stegette the next day. The improvement of the system was taking place slowly. Progress is not always perceptible to the untrained eye. Keep the faith.

Isolated communities are known to develop their own dialects. Helena could barely understand them, which made her worry the miners might not be able to understand her. So she spoke in the universal language of EVE: violence.

News of CODEdot's big tournament win has gotten around. Carebears are very upset that the New Order didn't disappear afterward. Maybe they assumed we would want to retire on top. Not quite. The New Order's plan is to remain on the top of EVE, permanently. So far, so good.

Helena was very satisfied with what she was able to accomplish in a short time, but there's always more work to be done. 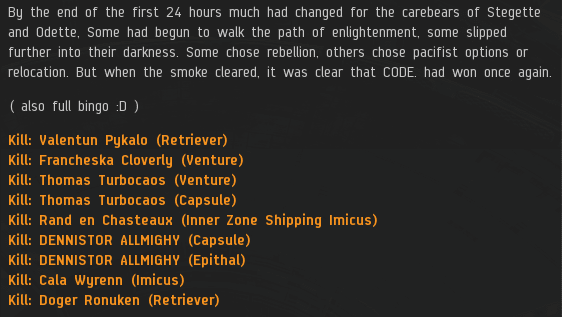 Our Agent reviewed her killmails and solemnly reflected upon the fact that without her intervention, those players never would have experienced any real EVE gameplay. They might've learned more calculus, though.

One gank recipient put a 50 million isk bounty on Helena instead of buying a 10 million isk permit. On second thought, before these carebears start learning calculus, maybe they should master arithmetic?
Posted by MinerBumping at 18:15