Ganks of Future Past, Part 2

Previously, on MinerBumping... Illegal miner Riokken Bedala was ganked for mining without a permit. She refused to buy a permit, giving Agent Liek DarZ the ol' "I would've bought one if you asked first" line. When Riokken returned to the asteroid belts in a new ship, she encountered an undercover Agent, Alexis Smythe.

Alexis was the perfect undercover miner. Flying a Procurer, her disguise was very convincing. But she never for one moment forgot who she really was, and what she was really about: the Code. Agents never go native. Natives go Agent.

Whenever a miner switches from Retriever/Mackinaw/Hulk to a Procurer or Skiff, it's a victory for the New Order. In fact, all miners who sacrifice yield/cargo for tank indirectly give us a compliment. When speaking to the ganker, Riokken's 40 million isk Retriever was worth 30 million. Now it was down to 25 million. Carebear math.

Riokken repeated the "I would've bought one if you asked" line. I guess we'll never know, since she was ganked. Right...?

After advising Alexis to check miners' bios, Riokken took her own advice. She was shocked by what she saw. 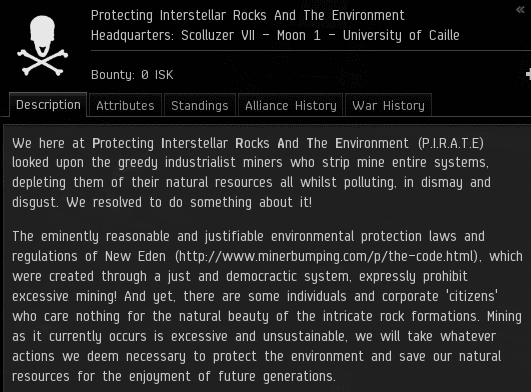 The friendly miner she'd been chatting with was an Agent of the New Order the whole time! Agents are everywhere now. 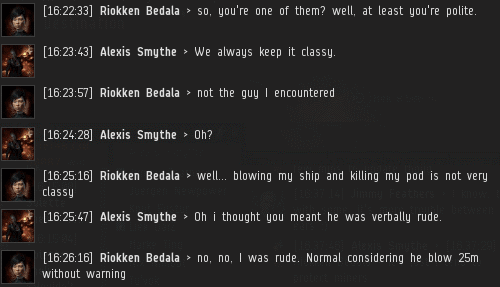 Caught off guard, Riokken admitted that she was the one who had been verbally rude. Was this admission of guilt the first, fragile step toward Code compliance?

Alexis came up with a brilliant question. Riokken had been ganked in the past, and therefore understood the power of the New Order. At the same time, she was pre-ganked from Alexis' perspective. Her gank would be performed in the future. Riokken was ganked and yet to be ganked. It was the answer to the "I would've paid" paradox. 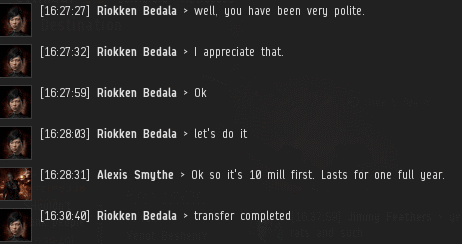 Riokken couldn't argue with the Agent's flawless reasoning. By her own logic, she had no choice but to pay.

Released from the stress of mining illegally, Riokken could finally see it: Agent Alexis was not a monster or a sociopath like the rebels claim. She was a friend. 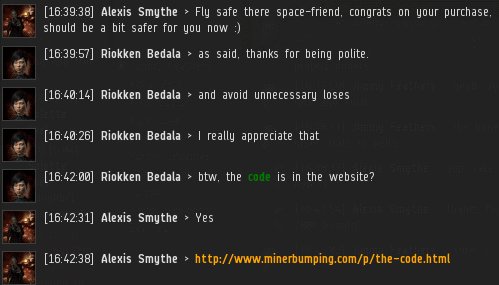 With permit in hand, Riokken was already feeling a lot better about herself and about highsec and EVE in general. All permit-holding miners report experiencing these emotions. 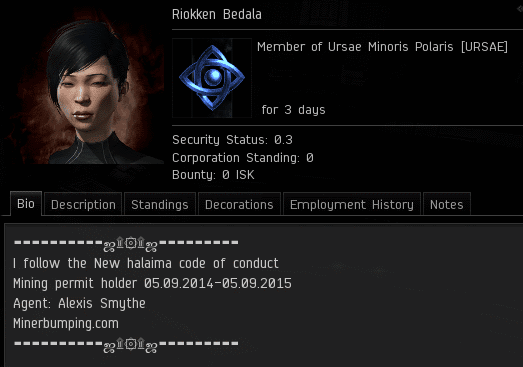 Riokken no longer aspired to mine like a bot. She wanted to be a member of the New Order family in good standing. Now, at last, she could. Extraordinary!
Posted by MinerBumping at 18:06