My inbox is filled with EVEmails like this one from Awol Soilder. Every time a carebear says "I would've paid!", an Agent gets his wings. 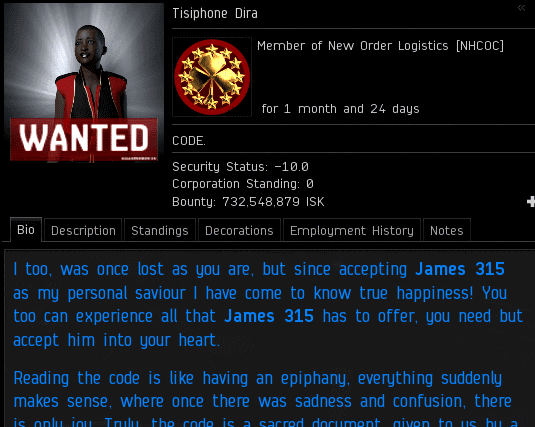 Or her wings, as the case may be. The complaint about "tisi" could refer to no one but Tisiphone Dira, a strong, powerful Agent. She ganked and podded Awol Soilder for the crime of AFK mining in a Hek asteroid belt.

Awol Soilder accepted Tisiphone's post-gank convo request, but it was obvious his heart wasn't in it. He didn't really want to chat, I think. 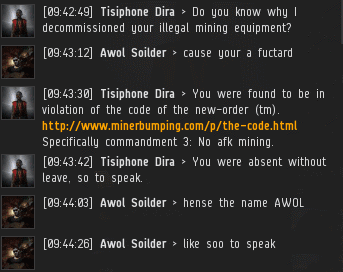 The miner had no one to blame. He'd set himself up for failure from the moment he chose his character name. Awol Soilder spent the entirety of his year in EVE mining in highsec. 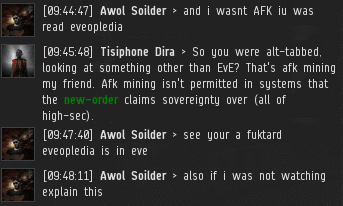 To Tisiphone's surprise, the carebear had a novel excuse for being AFK: Evelopedia is a part of EVE. This is a dangerous notion. If it catches on, the well-meaning website could lead countless miners to ruin! Until the New Order gets a page in Evelopedia, it cannot be considered a true part of EVE. All other EVE-related resources--the official forums, news websites, blogs, etc.--have the New Order everywhere. We're as relevant as it gets. 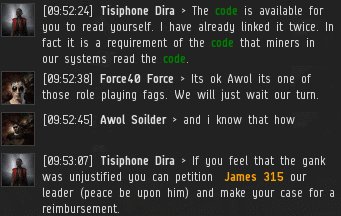 Tisiphone recommended Awol write a petition to me. Apparently that's why I received the EVEmail. Although, as a petition, it wasn't as respectful and well-written as one would hope. Meanwhile, Awol Soilder invited Force40 Force, his corpmate, to the convo. 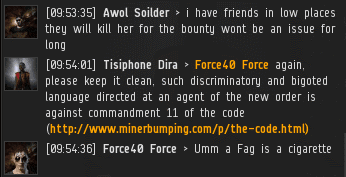 Force40 served as Awol's "wingman" for the convo. Unfortunately, everything he knew about being a wingman, he learned from highsec mining. 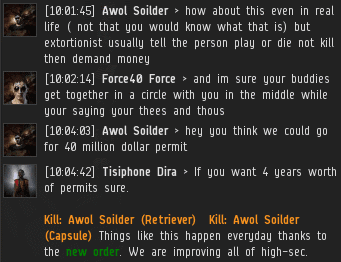 If Force40 had been a true friend, he would've helped Awol purchase a permit. Instead, he only cluttered the convo with nonsense. As you might have guessed, there's little culture to be found in the Hek mining scene. 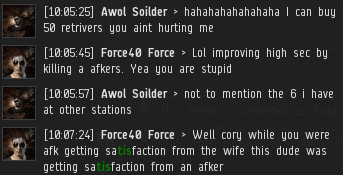 With his confidence boosted by his wingman, Awol Soilder pulled the "I have 6 other identical ships anyway" line. And Force40 came up with his own excuse for Awol Soilder's AFK mining habits. Unfortunately, Awol had already gone with the "Evelopedia" alibi. 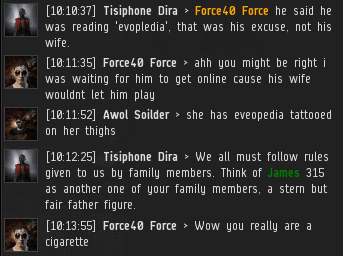 The carebears' web of lies came crashing down in front of their eyes. Only the Agent of the New Order remained, standing tall and true amidst the wreckage.

It was then that Awol and his buddy came up with a dastardly plan to trap Tisiphone. They brought their Capsules into the asteroid belt where CONCORD was still on patrol, and they dared Tisiphone to pod them. Awol warned two local miners, who were also in the belt. 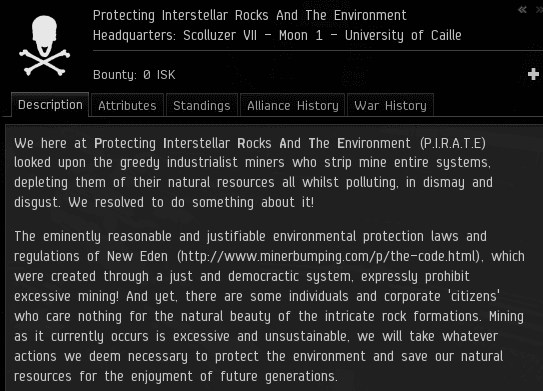 One of the two miners, Alexis Smythe, was a member of a New Order loyalist corporation. Alexis immediately relayed news of CONCORD's presence to Agent Tisiphone. (Eyes and ears everywhere!) Awol and Force40 continued their taunts in local, believing themselves totally safe. 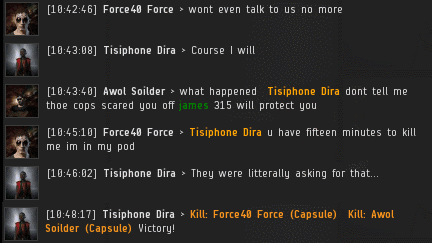 But safety is to be found only in the Code. Using Alexis as a warp-in, Tisiphone landed next to the pods. Her guns divided into two groups, she killed both pods in a single burst of fire, right under CONCORD's nose. It was glorious. Tisiphone was victorious. And the Code gained much acclaim that day, as every other day!
Posted by MinerBumping at 18:26