One of the biggest differences between the New Order and the carebears is that the New Order's perception of the world revolves around truth, whereas the carebears view the world through a lens of lies and deception. And the most cruel of their deceptions is their self-deception. They feed each other a diet of the most outrageous lies about EVE you can imagine. Let us examine how this situation was reflected in killmails during the week of August 14th @ 00:00 EVEtime through August 20th @ 23:59 EVEtime. 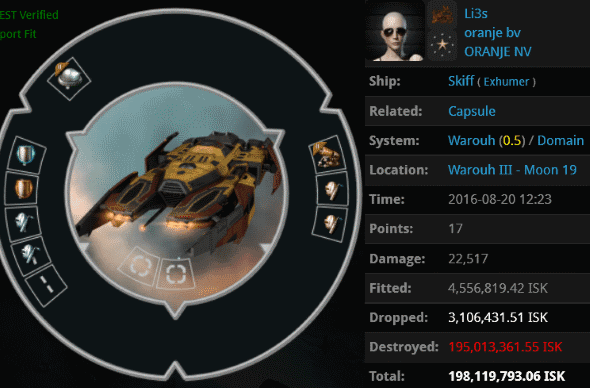 Someone told Li3s--whose name was only too appropriate--that Skiffs grant the user absolute safety in highsec. Though tanking up a Skiff is a solid step toward Code-compliance, it's still only a step--not the whole journey. Li3s concocted a bizarre structure-tanking setup for his Skiff and was promptly destroyed by Agents Rick Therapist, Brutal Anna, Marina Gankalot, and Carebears' Nightmare. 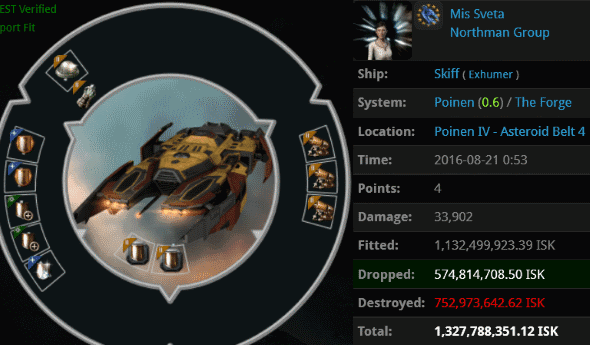 Another, related lie: "A well-tanked Skiff grants the user absolute safety in highsec." Mis Sveta tanked her Skiff up to nearly 34,000 hitpoints. She was too proud to buy a permit, but she didn't mind spending 1.3 billion isk on her mining vessel. Agents Sigrid Freud, Mal Warre, Ilithyia Borgia, Mack Poddington, James Poddington, Hulk Poddington, loyal anon, Lawrence Lawton, Chap Muerte, and Allise Soprano were drawn to the Skiff not because of its bling, but because it lacked a permit. Though they certainly helped themselves to a lot of that bling, regardless. 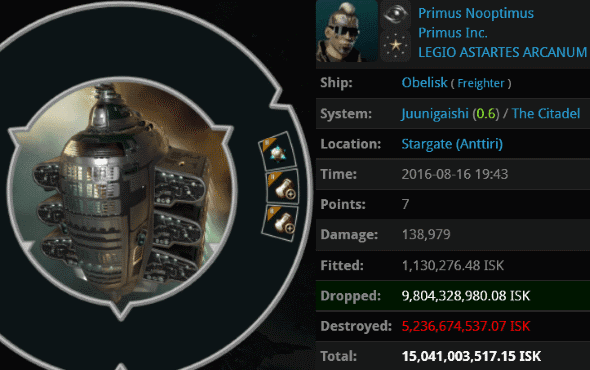 It was a bad week for the non-compliant freighters: More than two dozen of them met their end at the hands of the New Order. Primus Nooptimus probably had some long, boring sob story about why he needed to move an anti-tanked freighter worth 15 billion isk through highsec. But any story that begins with "I didn't have a permit, but..." ends the same way. He was stealth-bombed into oblivion by Agents Justin Kusion, Jason Kusion, Jake Kusion, Joel Kusion, Prixm Wind, Nin Rin, Yvain Bluewater, Logical Fallacy, Miner Compliance Officer, Hayley, Jayson Kusion, Logical Fatality, Jayden Kusion, Jackson Kusion, Johnathan Kusion, Jeremiah Kusion, Joseph Kusion, Unwarranted Assumption, Joshua Kusion, big brutor three, big brutor four, and Half-Life Warboy.

Reflecting on his triumph, Jason Kusion did a quick after action report on the kill--which is even more remarkable once the details are revealed:


I had just logged on for the day when I spotted an Obelisk being webbed towards Juuni gate. I quickly dispatched 4 of my gankers to disable his faction fitted Hyena webber on the Antirri gate in Juuni. At this point he decided to attempt to dock in Juuni instead of jumping the gate into the 0.7 Antirri (and safety). Bumper QuickSwipe Collier was lucky enough to bump him off the gate before he realized his mistake. I pinged Logical Fallacy and the two of us managed to solo the whale and secure loot while Anti-Gankers watched. 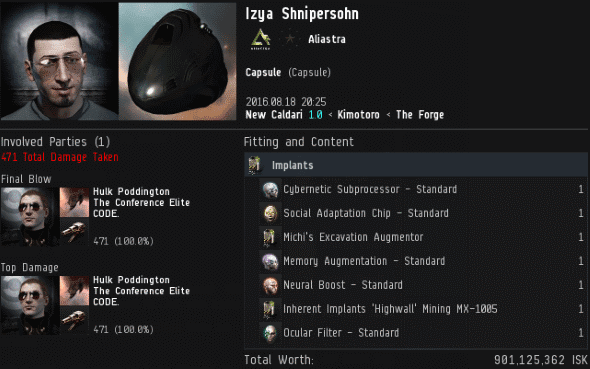 No, the Pod of the Week didn't come early. Pictured above is just one of the pods (containing Michi's Excavation Augmentors, no less) that was liberated from its Hulk container. You see, Agents Lawrence Lawton, James Poddington, Mack Poddington, and Hulk Poddington discovered a group of bots working the deadspace mission sites in the 1.0 security system of New Caldari. 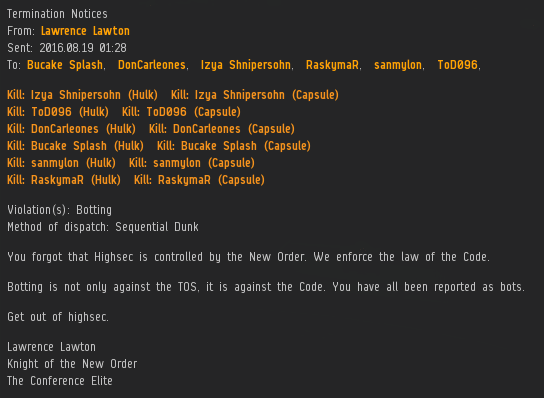 Half a dozen botting Hulks and all their blingy pods were destroyed. Because it was a 1.0 system, our heroes relied on high-alpha Tornadoes and Thrashers. In all, 12.4 billion isk was destroyed, including six Michi's Excavation Augmentors. 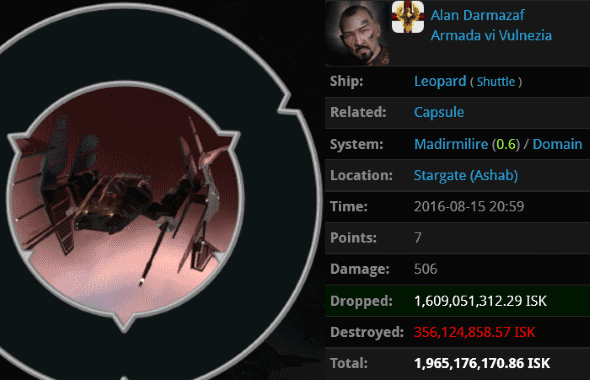 Alan Darmazaf had a funny idea about filling his head with expensive implants instead of relying on skill, strength of character, and the Code. Agent Aaaarrgg managed to kill him before he even had a chance to plug the implants in: 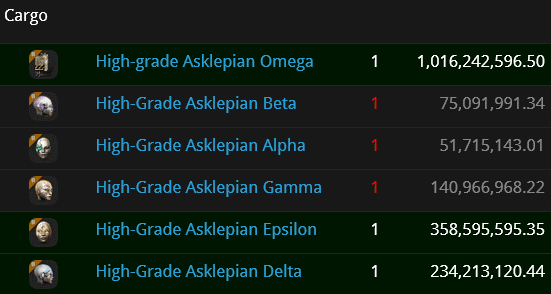 It was an "Asklepian" set, and for some reason Alan thought it was a good idea to haul it around in his AFK autopiloting shuttle. Supposedly these implants add to your ship's armor tank, but not the way Alan was using them. 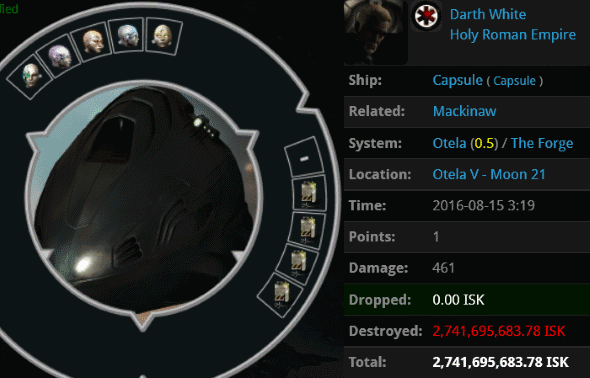 Now for the real Pod of the Week. Darth White's 2.7 billion isk secret was exposed to the light of truth and justice by Agent Lawrence Lawton. 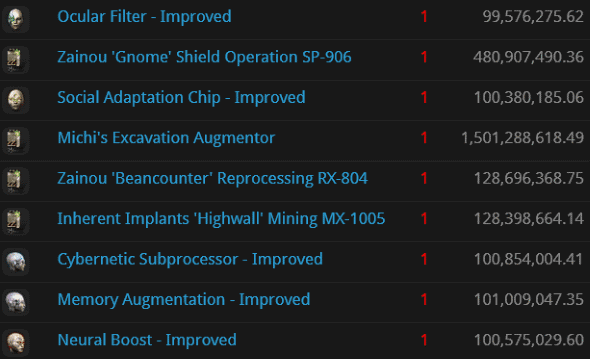 Another Michi's Excavation Augmentor down! Our Agents won't rest until those implants are only a distant memory.
Posted by MinerBumping at 21:03