Another typical day in the Anti-Ganking channel: Mutha Fugga Jones attempted to report a ganker. Rather than productive anti-ganking measures being taken, an argument erupted.

Our spies have observed that the Anti-Gankers spend far more time fighting each other than fighting us. I suppose, like most EVE players, they're only interested in fights they can win.

As the brawl drew in more participants, a ban was inevitable.

Amusingly, even those who choose to take part in the Anti-Ganking "community" eventually refer to it as toxic. Mutha was banned and peace was restored to the channel. But for how long?

Mere seconds after Mutha was identified as a CODE.-sponsored saboteur, another potential spy was uncovered. 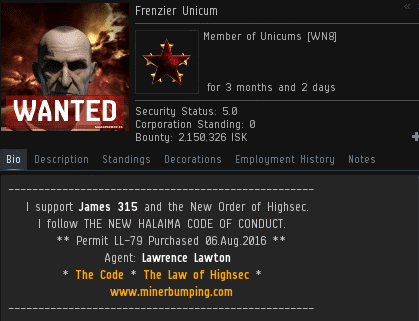 Unlike Mutha, who was not affiliated with the New Order, Frenzier Unicum did appear to have at least some connection to it. He'd recently purchased a mining permit from Agent Lawrence Lawton. Had the Anti-Gankers, for once, actually found a genuine spy--rather than inadvertently banning one of their own supporters?

Upon further inspection, Frenzier wasn't a true-believing advocate for the Code. He was a skeptic. Frenzier had bought a permit, but he doubted that it would be honored. 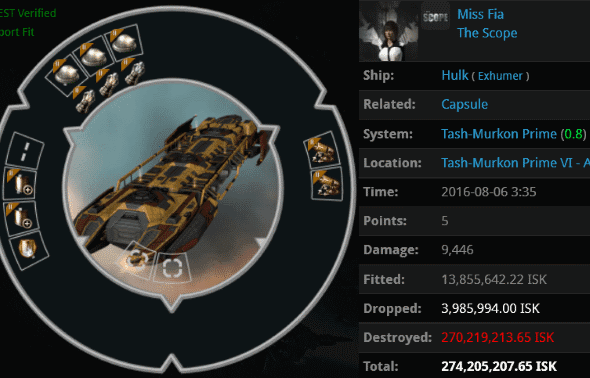 Frenzier didn't hide his true motive for aligning with the New Order. He had a vendetta against Miss Fia, a bot whose Hulk kept taking all of the ore in the Tash-Murkon Prime System. Frenzier enlisted the aid of Agent Lawrence and his friends, who killed the bot's Hulk. 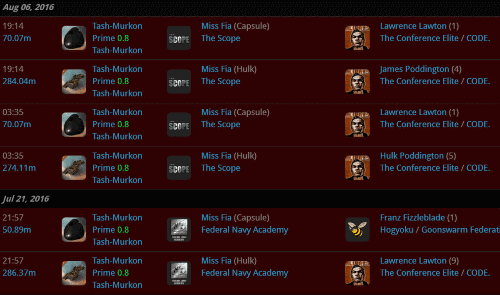 A couple weeks earlier, Lawrence had killed another of Miss Fia's Hulks. When Frenzier reported Miss Fia as a bot, Lawrence investigated. The story checked out. And it was doubly confirmed when Lawrence ganked Miss Fia's third Hulk in the same system. Miss Fia was indeed a bot.

When Frenzier told the story of why he bought a mining permit, the Anti-Gankers were horrified.

Even as Frenzier went into more detail about the circumstances, the Anti-Gankers grew more disgusted. Frenzier was responsible for the assassination of an innocent highsec miner.

Frenzier, though skeptical about the Code, recognized that gankers could perform a useful function in highsec. He went to the Anti-Ganking channel for guidance--only to be told that he should allow himself to be pushed around by a ravenous Hulk. Frenzier began to question everything he thought he knew about gankers, miners, and the Anti-Ganking movement.