Putting Miners to the Test

Reicher514, a member of a nullsec alliance, was deeply skeptical about the Code. Still, he couldn't help but be curious. He decided to make a visit to highsec and discover the truth for himself. 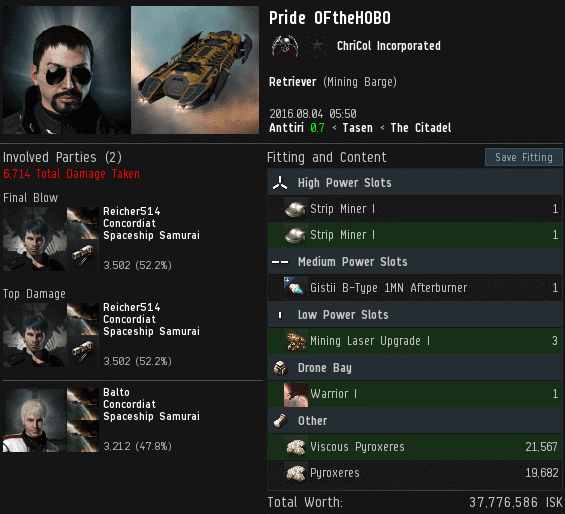 So far, everything seemed to be confirmed. Pride OFtheHOBO was mining in a completely untanked ship. He hadn't bothered to take evasive action even after two Catalysts landed on grid and approached him. He must've been AFK. Reicher514 invited the miner to a convo. A few minutes later, he responded.

The miner was hostile and defensive. If only he'd spent that much energy defending himself when it still could've made a difference.

Reicher514 tested the miner. Pride OFtheHOBO insisted that the loss of his Retriever was due to the ganker's "cowardice" and not his own negligence.

Though the miner was only willing to spend his EVE career mining in what he believed to be total safety, he accused the nullsec pilot of being a "coward".

It's common for carebears to claim that ganking isn't PvP. On this basis, they attempt to dismiss all of the achievements of the New Order. How would the miner respond when he learned that Reicher514 was a nullsec pilot?

Pride OFtheHOBO was reluctant to accept the evidence staring him in the face. He'd always been told that gankers only shoot ships that can't shoot back. Pride floated the possibility that Reicher514's killboard--containing more than 500 API-verified kills--had been fabricated.

Even if Reicher514's kills were genuine, too many of them were "coward kills" and didn't count.

Critics look down upon CODE. for its tens of thousands of highsec ganks. As Reicher514 learned, miners are equally willing to dismiss the combat record of nullsec pilots when it suits them.

Pride OFtheHOBO sneered at all of the kills where Reicher514 was responsible for tackling the enemy ship. However, Reicher514 had a killboard full of other kinds of kills. Maybe the highsec miner would consider those worthy.

No love. Though Pride OFtheHOBO spent his days AFK mining in highsec with a Retriever, he simply didn't feel any of the nullsec kills were up to his standards.

The miner excused himself and left for work. Reicher514 had learned a lot from this encounter. Though he'd come to the highsec asteroid belts as a skeptic, he left with a greater understanding of why the New Order and its Code are necessary. There is much work to be done in highsec--and someone needs to make sure it gets done.
Posted by MinerBumping at 18:06