The Battle for Aridia, Part 4

Previously, on MinerBumping... Agent Alt 00 braved the wilderness of Aridia to bring the Code to the region's highsec islands. She met with resistance from miners of the U.S.A. - University corporation, a feeder corp for the United Systems of Aridia alliance. Alt 00 had no choice but to punish the Code violators in the customary manner. Instead of learning their lesson, however, they only grew more upset about the Code. 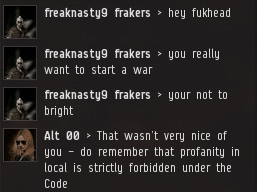 Alt 00's repeated ganks of the miners had gotten her on the Aridian alliance's radar.

freaknasty9 frakers was the CEO of one of the alliance's corporations. Alt 00 had ganked one of the corp's miners earlier, and now the CEO threatened all-out war. 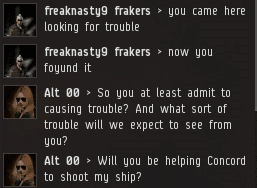 For her part, Alt 00 didn't consider her actions to have been provocative at all. She'd only been enforcing the Code like always. 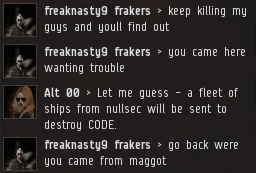 Our Agents are frequently warned about the consequences of ganking highsec miners. So far, however, the only consequence has been victory. 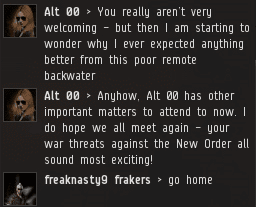 Alt 00 shrugged off the threats and set off to gather more supplies for her Aridian campaign. Maybe freaknasty9 and his fellow Aridians would calm down in the meantime. 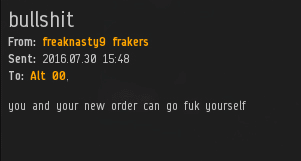 ...Though perhaps that was being too optimistic. 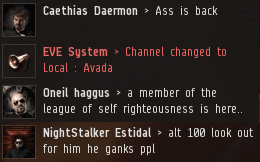 The next day, Alt 00 and her scout alt returned to the highsec island. She was famous now. 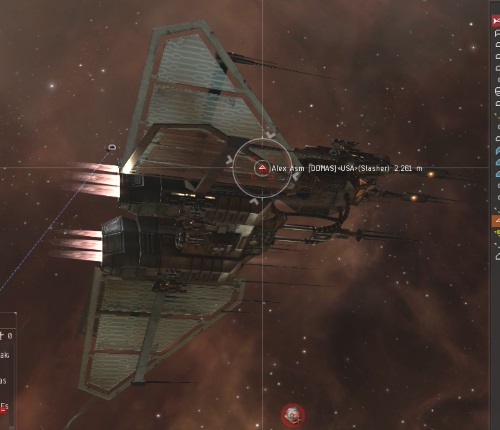 Out of nowhere--an attack! Alt 00's covert ops scout alt came under fire. It was Alex Asm, the miner our Agent had ganked the day before. He'd come seeking revenge!

Our heroine's scout alt was flying an unarmed Buzzard. The attacker was using a Slasher. Though the odds were stacked against her, the Agent slowly but surely prevailed. The CODE always wins. Always!

Alex's Slasher was destroyed by our Agent--with some assistance from CONCORD. The Buzzard survived. Alt 00 shook her head in disapproval. Miners only shoot things that can't shoot back. 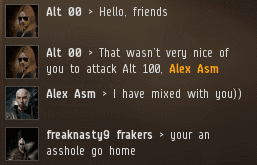 Alt 00 took a victory lap in local. Alex used Google Translator to say something; I can only assume it was the Russian equivalent of "good fight." Alex's CEO didn't show as much sportsmanship. 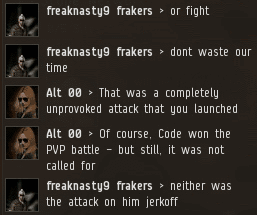 Alt 00 was in a forgiving mood, but she wanted to make clear that Alex's treason was inappropriate. By contrast, freaknasty9 was still clinging to his old grudge. freaknasty9 had cautioned Alt 00 that enforcing the Code would result in massive retaliation. So far, it was nothing our heroine couldn't handle. But what else did the Aridians have up their sleeves? 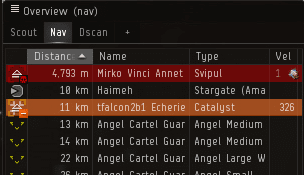 To be continued...
Posted by MinerBumping at 16:10