The Battle for Aridia, Part 10

Previously, on MinerBumping... Agent Alt 00's triumphs in Aridia wrought havoc among the rebel United Systems of Aridia alliance and its feeder corp, U.S.A. - University. As the carebears embarrassed themselves in local, support for the Code grew rapidly. 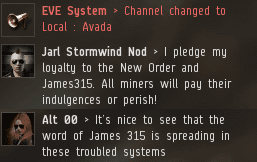 The conflict was all anyone was talking about in Aridia. It forced everyone to pick a side. Jarl Stormwind Nod was the latest to choose. He chose wisely.

Alt 00 was sure to let Jarl know that although the life of a New Order Agent seems glamorous from the outside, there are also obstacles to overcome.

Our Agent decided to take Jarl on a tour of Aridia's highsec islands so he could see the squalor for himself.

The rebels were still complaining that their mining operations had been shut down. Mr Freak Frakazoids was one of the angriest and most hostile of the bunch.

Alt 00 tried to cheer them up by announcing the exciting news about all of the new permit owners in the area. 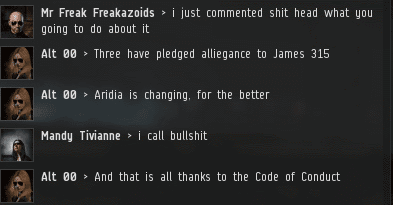 Yet the miners just couldn't seem to get into the spirit of things. What was wrong with them? 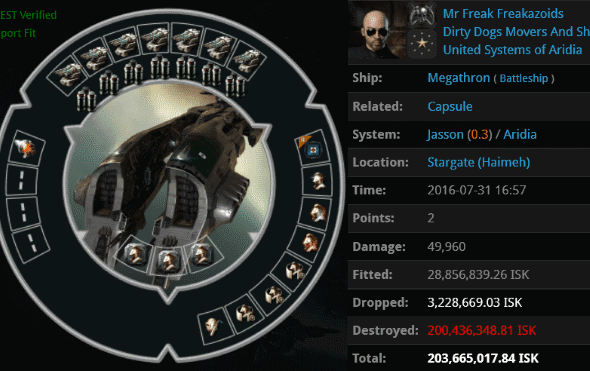 In Mr Freak's case, the problem seemed clear: He was one of the rebels who lost a battleship while trying to camp Alt 00's route through lowsec. 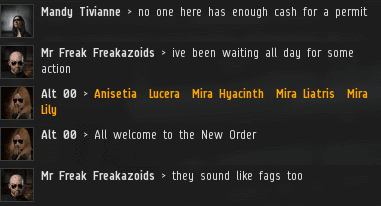 Mr Freak's loss still stung. To cope with the pain, he suppressed all memory of the event. He boasted that he'd been "waiting all day for some action," even though he'd already had more action than he could handle.

From the Code: "They ask what I am 'saving' them from. I save the miners from themselves." More than ever, the words of the Code rang true. Alt 00 thought to herself that it was good that Jarl was witnessing this. 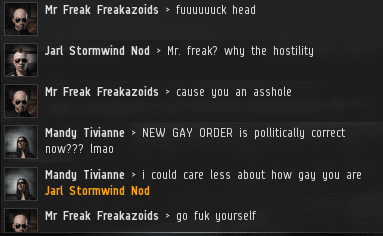 If highsec is to be transformed into a paradise worthy of its Code, the full horror of carebearism and bot-aspirancy must be looked upon--stared right in the face, without flinching. 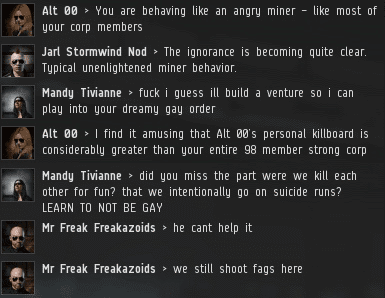 If Jarl had carried with him any doubts about his decision to side with the New Order, those doubts were long gone. 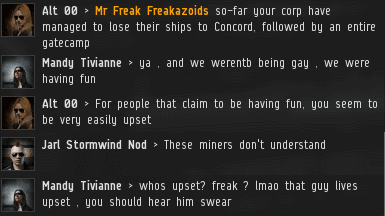 The rebels tried to pass off their losses as unimportant and "fun", but Jarl saw right through it. Everything Alt 00 had told him about the carebears was true. And the Code, plainly, was the only answer. Anyone could see that now. 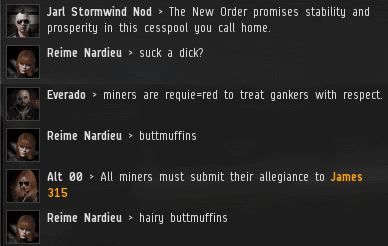 Another rebel miner spoke up and immediately condemned herself. Witnessing this scene, Everado began studying the Code. In no time at all, he sized up the situation and determined that the New Order was right. 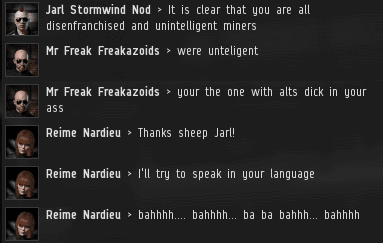 Without having to say anything, Alt 00 won the argument. All she had to do was bring a potential recruit into a highsec system and let the miners start talking--or bahhhhhing. If the struggle for highsec's future is a war of ideas, then the rebels, carebears, bot-aspirants, and Anti-Gankers are like ships that can't shoot back.

Alt 00 won the debate. Now it was time to win the war.