The Battle for Aridia, Part 12

Previously, on MinerBumping... Agent Alt 00 loved Aridia so much that she sent them the Code. Much of Aridia responded with genuine appreciation, and they joined the New Order enthusiastically. But Aridia was also home to some swine who didn't value the Code's pearls of wisdom. The resistance was centered around the United Systems of Aridia alliance and its feeder corp, U.S.A. - University. Alt 00 went straight to the source.

Alt 00 contacted April Longing, CEO of U.S.A. - University. Though it was their first meeting, April was all too familiar with our Agent. She was all the corp could talk about these days.

Now April had the chance to confront her nemesis face to face. First impressions are what they are, but Alt 00 was underwhelmed. 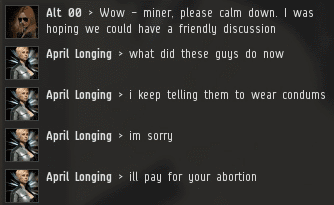 The CEO was dismissive of Alt 00; April hadn't lost a ship to her personally. Her corp members had suffered from all the ganks, but she didn't seem too concerned about that. 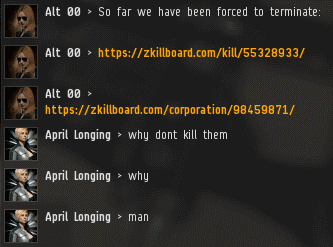 Alt 00 decided to remind her what was at stake. 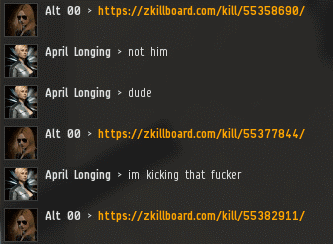 Our Agent had a long list of kills. If April didn't do something about it, the list would only grow longer. 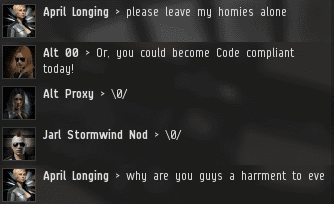 April admitted she wanted the ganks to stop. Yet she didn't show any willingness to obey the Code. She didn't even make an effort to understand it. 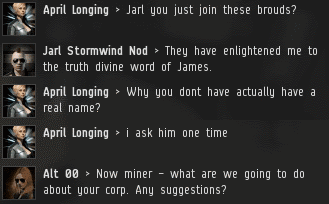 April's flippant attitude had gotten her nowhere. She couldn't deny the kills. The problem had been presented; now it was time to talk about solutions. 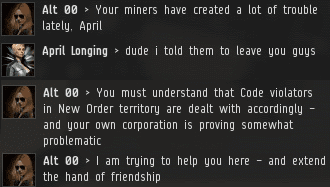 The critical moment was reached. April could do the responsible thing and embrace the Code, or she could condemn herself and her corp. 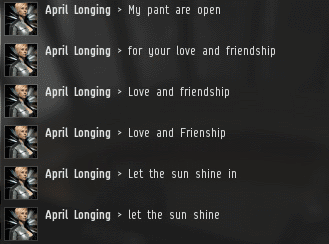 Some CEOs are incapable of serving their people well. 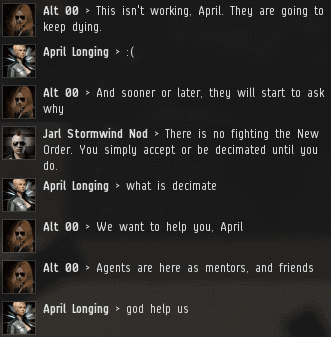 Our Agents are optimists by nature. They want to give the carebears every possible opportunity to avoid a terrible fate. At the same time, however, our Agents are realists and pragmatists. They're in the business of making things happen. If diplomacy won't get the job done, there are alternatives.

By now, it was obvious what April's problem was. She hadn't lost a ship yet, and she wouldn't have any empathy for her corp members until that happened. And in the meantime, she would act as a symbol of the anti-Code resistance in Aridia. Alt 00 was determined to target April herself for destruction. 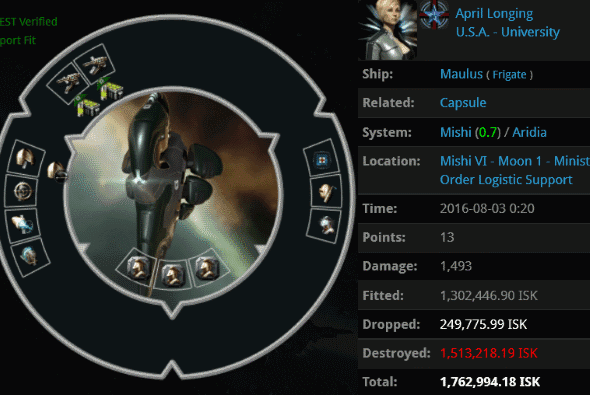 Our Agent didn't have to wait long before a target of opportunity presented itself. In a daring raid under the sentry guns of a station, Alt Proxy ambushed April's Maulus. But the real prize was waiting inside: Alt 00 immediately followed up with a gank of April's pod. There were no implants inside--there was something better: Alt 00 acquired the frozen corpse of U.S.A. - University's leader.

April Longing, firebrand of the resistance, had been bested in elite PvP and humiliated in local for all to see. All hope of a rebel victory was obliterated. Our Agent was triumphant once more. Now there were two possibilities for the rebels: They could accept that they were beaten and open themselves to the wisdom of the Code. Or they could fully disengage from reality and abandon any semblance of sanity they still possessed.

To be concluded...
Posted by MinerBumping at 00:23