The Battle for Aridia, Part 7

Previously, on MinerBumping... Agent Alt 00's heroic deeds in Aridia won her great fame and made her public enemy number one for the United Systems of Aridia alliance and its feeder corp, U.S.A. - University. They attempted to camp the lowsec entry point to Aridia's highsec island systems. But the rebel camp was swept away by the New Order's lowsec allies--costing the rebels 1.5 billion isk. 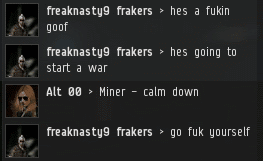 Now that it controlled even the surrounding lowsec areas, the New Order's command of Aridian highsec could no longer be disputed. freaknasty9 frakers, CEO of one of the rebel alliance's corps, found the situation intolerable. 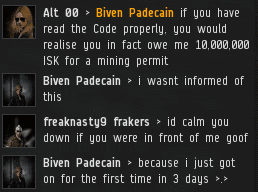 Our Agents are known for being generous with their time. Alt 00 took a moment to help one of the rebels whose Retrievers she'd ganked. 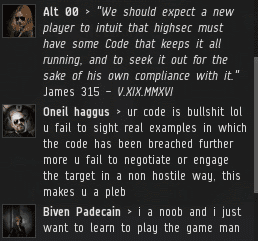 Alt 00 is well versed in both the Code and the day-to-day musings featured on MinerBumping. This makes it all but impossible to win a debate against her. 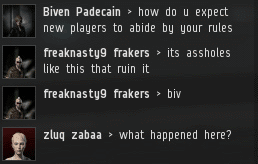 zluq zabaa, architect of the massive victory against the rebels in lowsec, dropped by to see how everyone was doing. 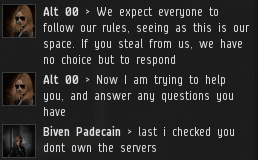 The former Retriever pilot was a typical carebear. She felt she was entitled to total safety in a PvP game because the New Order didn't host the server she was playing on. But one of EVE's great selling points is that outside of China, it's all on a single shard. Which means every server is a New Order server. 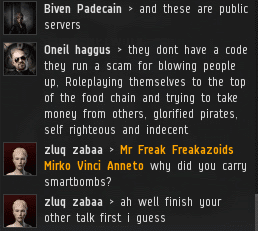 zluq wanted to do a postmortem of the great lowsec battle, but the rebels were preoccupied. 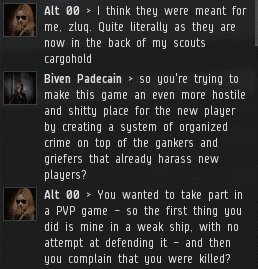 Biven Padecain had a bad case of "new player syndrome". Her whining became so annoying that it started to grate on the nerves of her fellow rebels: 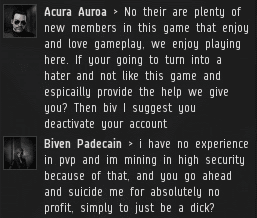 Acura Auroa belonged to freaknasty9's corporation. He grew tired of hearing Biven complain about how bad EVE is for new players. Their alliance supported the feeder corp that Biven had joined. But apparently Biven didn't appreciate any of it--not if they couldn't save her Retriever. 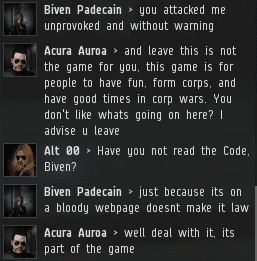 Biven's fellow rebel then encouraged her to quit the game. So much for the anti-Code crowd's alleged concern for new player retention. 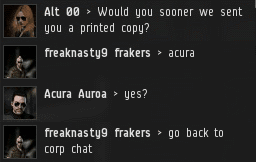 Acura's CEO wasn't happy. Looks like he got called to the principal's office. 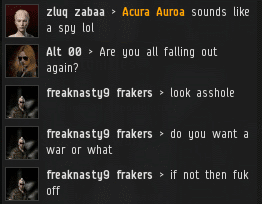 Thanks to its Code, the New Order enjoys an absolute unity of purpose. Our enemies, by contrast, tend to bicker with each other. This is because bot-aspirancy and carebearism are inherently based around selfishness. 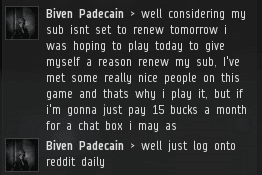 Biven lamented the state of EVE. Her fellow rebels couldn't protect her, not even with the aid of CONCORD. She threatened to quit the game forever. If she did quit, Alt 00 wouldn't need to worry about her breaking the Code anymore. But there was still an entire alliance of rebels to deal with. freaknasty9 demanded to know if Alt 00 intended to declare war.