Resist the Code by Obeying It, Part 1

When it comes to sportsmanship and fair play, no one else in EVE holds a candle to the New Order.

...Not that the carebears show any gratitude for it. 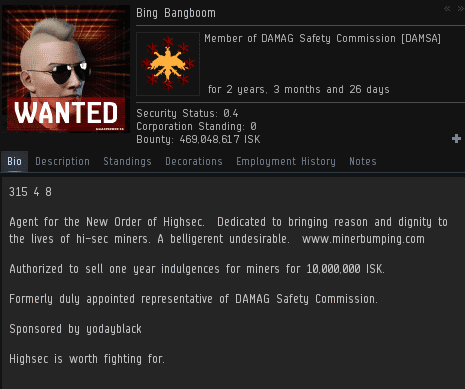 Even when judged by the standard of New Order Agents, Bing Bangboom is known for gentlemanly behavior and good conduct. Anti-Code rebels say we don't really care about the miners, but such cynicism can't easily survive an encounter with Bing. It's obvious he cares.

Zuul Achura, one of the skeptics who lived in Kino, revealed a total lack of understanding of the New Order. 'Twas time for Bing to educate him--and anyone else in local who might be listening.


FIONA LIA > what u are not in for the isk why do u sell them for 10mill isk then?
Zuul Achura > its not profitable for you to kill procudeds
Zuul Achura > so... you dont do it
Zuul Achura > its as safe (or more) than paying for a silly permit
Bing Bangboom > besides.... Kill: Dmac TM (Procurer)

Zuul argued that buying a Procurer was better than buying a permit. Although a Procurer is more expensive than a permit, Zuul was confident it would provide absolute safety. Bing debunked the claim, pulling an old Procurer kill at random from his killboard. The New Order has slaughtered countless Procurers and Skiffs over the years.

One way or another, justice is always served. The Code requires miners to tank their ships, but that's only one of the requirements. Yes, buying a Procurer is a good start. Still, it's no better than, for example, buying a permit while disobeying the rest of the Code.

Few miners will ever be remembered in EVE, and even those who do gain fame must give all the credit to the New Order. Our Agents, on the other hand, instantly become rock stars.

It's funny, isn't it? Gank a miner and he'll complain he wasn't warned about the Code. But when you tell a miner about the Code, he won't read it. This suggests that all of the allegedly un-warned miners deserve to be ganked. As I said, justice is always served in highsec.

At a moment like this, a New Order Agent's empathy always shines through. Bing truly felt sorry for the miner.

Zuul pitifully clung to the idea that Procurers provide total safety, despite having seen otherwise with his own eyes. Meanwhile, FIONA LIA, lacking faith in Procurers, embraced nihilism instead.

Every once in a long while, someone will suggest that everyone just ignore the New Order, as if that would make us "go away". It wouldn't work even if attempted--and it can't be attempted. We're too darn relevant.


FIONA LIA > U only declar war against low people corp that are doing mining. And then ccp wont kill u, since u are in war. Isent that it?
Nailah Yrisa > FIONA LIA nicely done
FIONA LIA > And u can´t do it against Deep Core Mining Inc. , if u could u will be hunte every wher u go,
Bing Bangboom > I wardec non-compliant corps and alliances
Bing Bangboom > but its true... I can't wardec people who hide in NPC corps
FIONA LIA > but u are doing the same thing, useing your dogs do your so called work, Sorry your scam

Bing quickly checked his privilege and found that as an Agent he was privileged indeed. Then he dropped a logic bomb: Whenever an isk-crazy carebear switches from yield to tank, it's a defeat for bot-aspirancy and a victory for the Code. And Zuul was advocating it! How would the rebels and skeptics respond to this revelation?